Review: Upside Down by A.M. Madden (Breaking the Rules #3) 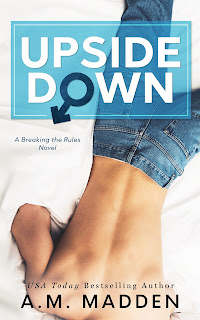 Note: An advanced reader copy (ARC) was provided by the author via Wildfire Marketing Solutions.
I've read a few of A.M. Madden's books in the past, but this latest novel of hers is undoubtedly my favorite. Upside Down is both the third novel in Madden's Breaking the Rules series and a standalone; the latter I'm confident in because I've never read the first two books in the former, yet I was able to fully enjoy this new release without feeling clueless about certain side characters or story lines. That being said, those two previous releases in the series are now on my to-be-read list because my curiosity has been piqued. This new novel also happens to be an M/M romance, and well, if you're familiar with my reviews, this sub-genre is a personal favorite. With quite a few authors who traditionally write M/F romances trying their hand at LGBTQIA+ romance, I'm hopeful that it invites more readers who have never read the sub-genre before to check them out.
Upside Down is the story of twenty-eight-year-old Cooper Stanton, an English literature professor from Jersey and the middle child in a brood of five. With his parents and four siblings all living out their happily-ever-afters, Cooper is the odd man out, having just ended his most recent relationship with a woman he loved but was never in love with. Maybe the wedding of his younger brother will help get his mind off his romance woes, but being stuck on a luxury yacht with his younger sister's best friend may drive him crazy, and not necessarily in all the ways said best friend used to. You see, thirty-three-year-old Ricky Burrows has a theory when it comes to why Cooper's relationship all crash and burn: Cooper isn't as straight as he thinks he is. After one unforgettable kiss, Cooper's life is turned upside down, but will he want it right side up or discover this whole new state of being he finds himself in and will Ricky be the person with him on his journey?
I know some have tagged this book as a "straight to gay" or "gay for you" romance, two labels I'm not a huge fan of. Instead, I prefer to think of Cooper's story as one about his sexual awakening, one that he shares with Ricky. Cooper thought of himself as straight, and it did take him some time to come to terms with with the knowledge that he was most probably pansexual, and having that ringside seat to his self-discovery was one that I relished. A.M. Madden's penned a story with a great deal of heart alongside a generous amount of heat, but I appreciated that she didn't sugarcoat the complexities of exploring and owning one's sexuality as well as a new relationship. Both Cooper and Ricky had their respective hopes and fears, as well as apprehensions and aspirations, and it was presented quite beautifully, thanks to Madden's writing. Upside Down receives five stars.
Release Date: 07 December 2020
Date Read: 05 December 2020
Learn more about A.M. Madden.
Purchase Upside Down on Amazon.