Review: The Revenge Pact by Ilsa Madden-Miles (Kings of Football #1) 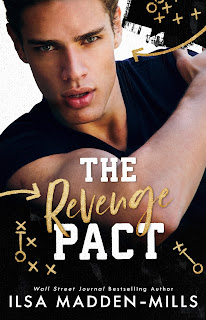 A sound comes from his throat, part frustration, part longing. "I'm always waiting." He shuts his eyes. "He's my friend and a brother, Ana. I can't be your revenge."

The he's gone before I can tell him that this, this was never about revenge...

Oh no. It's something else entirely.

This book! Gah! There were tears, people! That's how much The Revenge Pact, the first novel in the multi-authored Kings of Football series, got to me, and Ilsa Madden-Mills has set the bar astronomically high for the next two books. The series is about three best friends who are seniors and belong to the same college football team, the Braxton Badgers: River Tate, the wide receiver, Crew Smith, the quarterback, and Hollis Hudson, the tight end. Madden-Mills's book introduces readers to all three, but its spotlight is on twenty-one-year-old River, who also happens to be the president of his fraternity, Kappa.
You'd think someone as popular and well-liked as River Tate had the world at his feet, but there are a few things weighing on him--on the homefront, on the field, and on campus. That last one due in large part to the fact that for the past year or so, he's wanted one girl and one girl only--twenty-year-old Anastasia Bailey. But he can't pursue her, not when she happens to be the girlfriend of one of his frat brothers. River has made it a point to keep his distance, yet when an incident becomes public, leaving Anastasia humiliated, there's simply no way he can stand back--not even when a revenge pact is concocted and shook on. Revenge may be a dish best served cold, yet when this hopeful football player and this aspiring lawyer get together, the heat is undeniable...but will it leave these two burned?
This book went above and beyond anything and everything that I'd hoped for, and that's saying something because experience has taught me that Ilsa Madden-Mills is a storyteller who doesn't offer up "the usual" fare. Instead, this author has written a college romance that's more than just about two people struggling with their grades or trying to balance love and school. River and Anastasia's story was about two young people who both had long-held dreams but realize that fulfilling them may not always follow a particular well-worn path. In short, they can create their own path AND actually still have it all. Neither one of them was perfect, but at the very heart of them, these two were good people who were meant to be together; it simply took them a little longer to get to that point. This book made me tear up at certain points, and ultimately, it left me with a smile on my face. The Revenge Pact was an extraordinary romance about love and family and knowing when to wait and when to chase after your destiny. It snags five-plus stars.
Release Date: 03 December 2020
Date Read: 03 December 2020
Learn more about Ilsa Madden-Mills.
Purchase The Revenge Pact on Amazon.