Review: The Relationship Pact by Adriana Locke (Kings of Football #3) 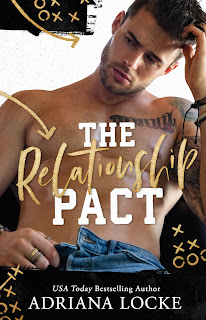 Note: An advanced reader copy (ARC) was provided by the author via Candi Kane PR.
I couldn't have chosen a better way to end the multi-authored Kings of Football trilogy than with Adriana Locke's fake relationship romance, The Relationship Pact. This is the third and final novel in the series, and it featured the last among the so-called "kings of football" from Braxton College to find love and purpose: Hollis Hudson. With his football season ending on less than spectacular fashion, college senior Hollis finds his future a bit more hazy than he expected. Maybe spending some time in Savannah, Georgia will help give him some clarity, even if he is there reluctantly. When twenty-four-year-old Larissa Mason approaches him at a bar and asks him to pretend to be her boyfriend for a few minutes, both think it's a one-time thing. Neither one anticipates it to lead to a few more favors. This is temporary, and it isn't a relationship. It's simply a relationship pact. Isn't it?
Oh, Hollis, Hollis, Hollis... This guy stole my heart right alongside Larissa's. There was so much about him that took me by surprise, but then, that's been the case with all three of our supposed kings of football. I loved the ease that Hollis and Larissa had with each other, just as much as I adored how they offered up support to one another even without having to ask for it. Another thing I enjoyed seeing was how these two maintained strong ties with those who mattered most to them--Hollis with his best friends, River Tate (The Revenge Pact by Ilsa Madden-Mills) and Crew Smith (The Romantic Pact by Meghan Quinn), and Larissa with her family and relatives and her best friend, Bellamy Davenport. There are also a few familiar "faces" to be found that fans and readers of Adriana Locke's work will be happy to see. Overall, The Relationship Pact wrapped things up for the Kings of Football series quite nicely, reminding us life doesn't always go as planned. This series ender gets five stars, and fingers crossed Locke satisfies my curiosity regarding Hollis's sister, Harlee, and that Reputation is everything I am hoping it will be.
-------------------------
Read my reviews for the Kings of Football series: