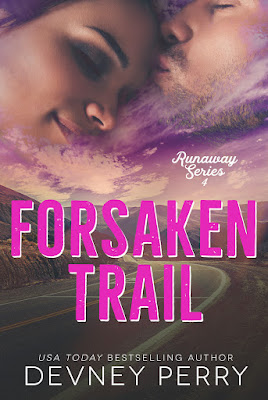 About Forsaken Trail
Aria Saint-James has planned the perfect getaway: sweatpants, takeout and two weeks alone with her sister and nephew. Nowhere on that list is wearing a low-cut dress and uncomfortable heels to attend a wedding where she knows neither the bride nor the groom. Toss in her nemesis, Brody Carmichael, and her road trip to Arizona is officially a bust.

But at least there is champagne.

She blames the bubbly for falling into bed with Brody that night. Enemy or no, the billionaire is irresistible in a tux. But after their one-night tryst, Aria has no choice but to cut her vacation short, returning home to escape his devilish smile, vowing never to see Brody again.

Except Aria gets a surprise a few weeks later—she’s pregnant. When he learns that she’s carrying his child, Brody offers Aria the chance of a lifetime. The catch? She has to live under his roof until the baby is born.

Either they’ll kill each other in nine months. Or discover love buried beneath their hate. 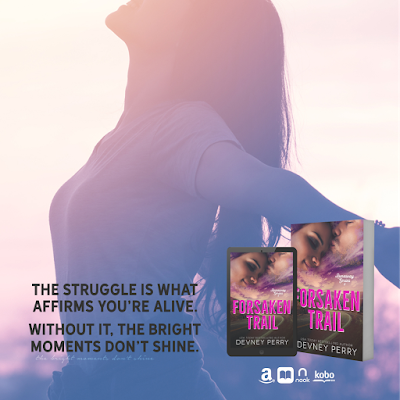 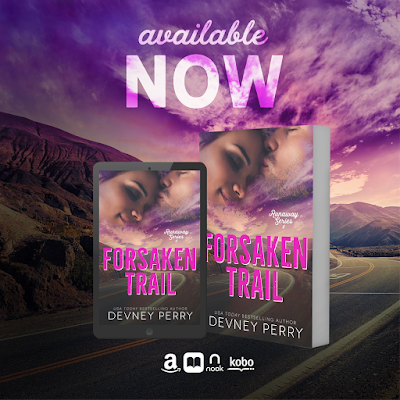 Devney Perry is a USA Today bestselling author. Born and raised in Montana, she loves writing books set in her treasured home state.

After working in the technology industry for nearly a decade, she abandoned conference calls and project schedules to enjoy a slower pace at home with her husband and two sons. Writing one book, let alone many, was not something she ever expected to do. But now that she’s discovered her true passion for writing romance, she has no plans to ever stop.