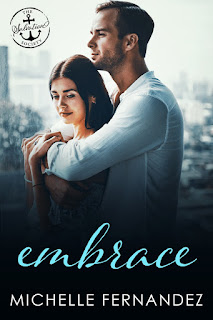 Note: An advanced reader copy (ARC) was provided by the publisher via Candi Kane PR.
Michelle Fernandez is a new-to-me author, and her contribution to Corinne Michaels' Salvation Society is my introduction to her writing. As noted in the blurb for Embrace, this novel is a crossover of Michaels' Salvation book universe and Fernandez's Broken Hero series, specifically her debut release, Till I Kissed You. The main characters in Embrace are Delilah Marshall and Brody Reinhardt. Dee's moved from Kansas to Los Angeles to pursue a career in public relations, with a dream job at the prestigious CJJ Public Relations. The move also provided the perfect opportunity to get away from her abusive ex. On the other hand, Brody is a former SEAL turned bodyguard with Cole Security Forces who's still haunted by everything he saw and experienced in active duty. They each had their cache of secrets from the past, but will it stop them from having a future?
This turned out to be a good read, and I did enjoy quite a bit of it. Brody and Dee went through traumatic things in the past, and there's a whole lot of stuff they're keeping because of it. These two aren't necessarily broken, but they've been damaged by everything they've been through, so there's wariness that feels ever-present. However, theirs is a story that reminds readers that while love doesn't conquer all, it does serve as a catalyst and inspiration for people to move forward and fight for the proverbial happily-ever-after. Their story was angsty but also inspiring, and I liked seeing Brody and Dee evolve and their relationship develop throughout. I'm awarding Embrace four stars.
Date Read: 09 December 2020
Learn more about Michelle Fernandez.
Purchase Embrace on Amazon.