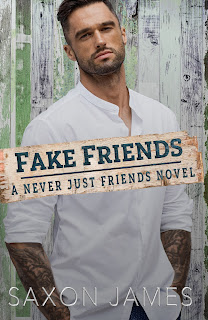 Note: An advanced reader copy (ARC) was provided by the author via Gay Romance Reviews Tours & Promo.
I've been waiting oh-so-patiently for this second Never Just Friends novel ever since I finished reading the series starter, Just Friends. From friends-to-lovers, Saxon James now gives readers an enemies-to-lovers romance, although the main characters started off as friends who had more than platonic feelings for each other but then everything imploded. For the record, you don't necessarily need to read the first book in order to enjoy or understand what happens in this second book; however, because I quite adored Just Friends, I highly and happily recommend you check it out before heading into Fake Friends, especially if you want to avoid spoilers when it comes to book one's main couple.
Fake Friends is the story of twenty-three-year-old Kelly "Circus" Atkins, social media influencer, and twenty-four-year-old Rowan Harvey, cook at his family's diner. Five years ago, Circus and Rowan finally gave in to the feelings that have been swirling around them for far longer than anyone else may have realized. All it took was one moment of deep-rooted fear to get to Rowan, however, leaving Circus with a broken nose and a shattered heart. Now, Rowan's back in their hometown, and if he hopes to replant his roots there, he knows he needs to apologize to Circus. But not much has changed, especially with as far as his feelings for Circus or his fear of embracing his true sexuality.
Confession: My expectations for this book were really high, and that was based on my three previous reads from Saxon James, all of which were great reads. And I did enjoy reading Circus and Rowan's story, especially because when you peel back all the hurt and anger, these two still had some honest-to-goodness feelings for each other. My hesitation, however, in giving the book the same rating as its predecessor because the whole back and forth between the two of them was really frustrating. But in terms of enjoyment, I have no complaints, and I did like how everything was resolved. I'm also looking forward to whatever comes next in the Never Just Friends series. I'm giving Fake Friends four stars.
-------------------------
Read my reviews for the Never Just Friends series: