Review: Destroy for Her by RB Hilliard (Steele Raiders MC #3) 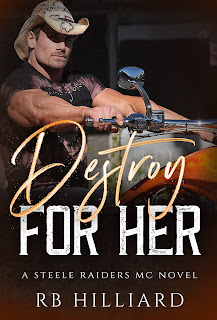 Note: An advanced reader copy (ARC) was provided by the author via Enticing Journey Book Promotions.
RB Hilliard returns to her Steele Raiders MC series with the third novel, Destroy for Her, which is a second-chance romance. If you're familiar with the series, then the main characters here are no strangers to you. Sage has loved one man and one man only for the past few years, but when it was clear that the club's road captain, Alex "Ax" Easton, wasn't interested, she did the only thing she believed was necessary in order for her to move on: leave. With nothing more than a note left behind, Sage took her daughter, Petal, and soon, she was dating someone else. But the man she thought would be her chance at happiness turned out to be her worst nightmare. When she finally gets her chance to escape, it's back in the fold of the Steele Raiders that she's offered the two things she's been missing: family and protection. This time around, though, Ax is finally ready to fight for a future with Sage and Petal, and he's prepared to destroy anyone who gets in his way.
This book definitely had and held my attention all throughout. I appreciated the fact that there was some hesitation and caution on both Sage's and Ax's parts when they saw each other again. After all, they had unintentionally hurt one another by their actions (or inaction in the case of Ax). But there was no denying how protective they were of one another, especially when it came to Petal. There were a couple of curve balls that took me by surprise, and I liked that RB Hilliard kept me on my toes with this one. As always, the supporting cast of characters exemplified what brotherhood truly was about. There was a bit of action and suspense alongside the sex and the romance, and there were two couples who certainly had me curious as to what awaited them as the Steele Raiders MC series progresses. I'm awarding Destroy for Her 4.5 stars out of a possible five stars.
-------------------------