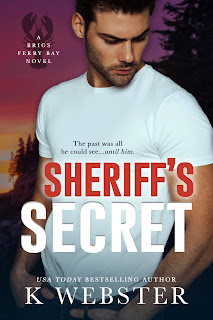 Note: An advanced reader copy (ARC) was provided by the author via Grey's Promotions.
I've been looking forward to the Brigs Ferry Bay series ever since I heard about it. I foolishly thought that the series starter, Sheriff's Secret, was K Webster's initial venture into M/M romance. Yeah, I found out just how wrong I was when I got to the end of the book and read the author's other M/M titles. I literally smacked my head. That's what I get for assuming, but at least that means I get to add said titles to my never-ending to-be-read list. After reading Sheriff's Secret, it's clear Webster does well with this sub-genre, as well.
When Jaxson Bell chose to keep his sexuality a secret, he knew it would mean having to lose the one boy he loved: Kian Abrams. Not only did he lose his boyfriend, but he lost his best friend during that high school graduation of theirs because Kian was one and the same. Now twenty-nine, Jaxson is sheriff of their small hometown of Brigs Ferry Bay and remains very much in the closet as he continues to pine for Kian. Then thirty-two-year-old Dante Kincaid comes to town in his big city suit with big plans for the local B&B. The man is cocky and pushes all of Jax's buttons, so why is he so drawn to this guy from New York? And does Dante seriously want to be with someone who may never, ever come out?
This was a good start to the Brigs Ferry Bay series. Readers get to have a pretty good idea what sort of town the series is set in and who the potential future main characters will be alongside getting to know the current ones, Dante and Jax. I wouldn't necessarily call what happens between these two as insta-love; if anything, there was insta-lust, but things do develop rather quickly. Aside from the romance, there's also a bit of mystery courtesy of the BFB Stalker targeting Dante and his brother, Callen. There's also the Rainbow Vigilante, but they're no villain. Overall, Sheriff's Secret was a four-starred read.
Release Date: 29 December 2020
Date Read: 24 December 2020
Learn more about K Webster.
Purchase Sheriff's Secret on Amazon.