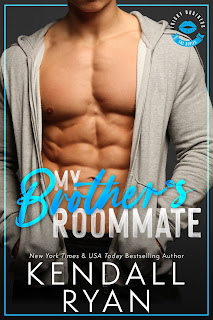 Note: An advanced reader copy (ARC) was provided by the author.
There's no business like Frisky Business, and the guys and gals of Kendall Ryan's series are feeling all kinds of frisky, and it's certainly more pleasure than business. My Brother's Roommate is the second book in the series, and the title pretty much clues you in as to what trope is employed. Penelope Blake hates her older brother's best friend who also happens to be his roommate...or maybe she just wants Wolfgang Cox to think she hates him. When she finds herself in need of a plus-one to an important work conference, her brother volunteers Wolfie to be her escort. This conference is her opportunity to show her boss that she's the perfect person for the upcoming promotion she's worked so hard for. However, with Wolfie around and only one hotel bed between them, will Penelope end up losing the promotion and her heart, and will Wolfie finally realize that he's more than enough for Penelope and that they both deserve each other and a friskily-ever-after?
As always, Kendall Ryan delivers the three Hs in this second Frisky Business book: heart, heat, and humor. Penelope initially likens Wolfie's being emotionally unavailable to a chinchilla, which is actually a rather sociable creature, but I consider him more like a porcupine--prickly but that has a lot to do with his need to protect himself due to certain things that happened in his past. This was a fast-paced read, and a highly enjoyable one at that. These two main characters surpassed my expectations, and they certainly endeared themselves to me. Four stars for My Brother's Roommate. Bring on book three!
-------------------------
Read my reviews for the Frisky Business series: