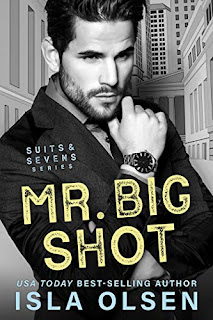 Note: An advanced reader copy (ARC) was provided by the author via Gay Romance Reviews ARC Team.
Mr. Big Shot is the first book in the Suits & Sevens series from Isla Olsen, and it's a spin-off of her popular Love & Luck series, which is about the Kelly clan. This spin-off series focuses its attention on the Real Good Looking Boys. Yeah, yeah, Olsen's main characters are all "real good looking boys", but this is actually the name of a local rugby sevens team, and it's the rival of none other than Shay Kelly's team, Shay being the eldest Kelly offspring whose own story plays out in Crazy Little Fling, book three of the Love & Luck series. Thirty-four-year-old Spencer Cox is the captain of the RGLB, and twenty-five-year-old William Crawford is best friends with Shay's boyfriend, Jamie. Oh, and Spence just happens to be the hot guy Will hooked up with along the hallway of a club. And did I forget to mention that Will turns out to be the new personal assistant hired for Spence?
I've been enjoying Isla Olsen's writing ever since I discovered it back in February by way of her debut, Fake It 'til You Make Out, and this new series starter definitely has me sitting up and paying attention. I loved the chemistry between the main characters, Spencer and Will, and their respective back stories certainly had me becoming more emotionally invested in both of them as individuals as much as I was in their relationship. As was the case with her two other series, Love & Luck and Royal & Reckless, there's a strong cast of characters in Suits & Sevens that has me itching to get to know them as each new book rolls out. I appreciated that while the ties between Spence and Will and the Kellys was pointed out, it didn't become too much of a focus for the book itself. There was heart, heat, and humor, and I very much enjoyed Mr. Big Shot, which easily receives 4.5 stars.
Date Read: 05 December 2020
Learn more about Isla Olsen.
Purchase Mr. Big Shot on Amazon.