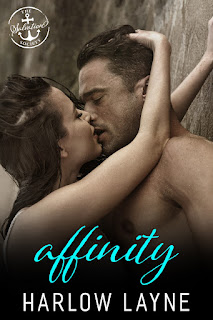 Note: An advanced reader copy (ARC) was provided by the publisher via Candi Kane PR.
Harlow Layne is a new-to-me author, and Affinity is my first-ever read from her. This book is part of the multi-authored Salvation Society collection, which are stories inspired by Corinne Michaels's Salvation series. These books are meant to be standalones, so you don't necessarily need to read anything prior to diving into this one. That being said, there are recurring characters from both Michaels's Beloved and Beholden books and Layne's Fairlane series, but again, they're "only" supporting characters here, so all's good.
Affinity is the story of Abbi (whose last name I don't recall being mentioned in the book, but if you happen to know what it is, please let me know via the comments section!), a recent college graduate moving to Los Angeles to start her dream job in public relations. A stop at Vegas, however, changes the trajectory of her life, but that's what happens when you wake up hungover and unable to remember the fact that you just got married to thirty-year-old troubled actor Reeves Jenner. Now, they're stuck together pretending to be in wedded bliss for a full year for the sake of their careers, but will their hearts survive?
This was an entertaining read, one that I was able to finish in one sitting. Waking up to find yourselves married is a common enough theme in romance, but Harlow Layne adds her own touch of creativity here, what with neither main character remembering anything that happened. I also liked that they weren't exactly fond of each other once they were forced to pretend they were relishing married life. This is when they get to know one another, at the same time that readers get to know them better. Out of all the supporting characters, I'm really hoping that we haven't seen the last of Abbi's older brother, Paul, because he certainly piqued my interest. Affinity gets four out of five stars.
Date Read: 08 December 2020
Learn more about Harlow Layne.
Purchase Affinity on Amazon.