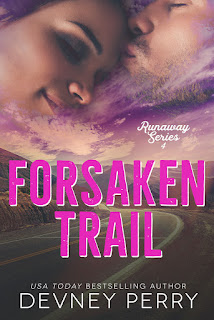 Note: An advanced reader copy (ARC) was provided by the author via Valentine PR.
There's something special about this series. Maybe it's the idea of a group of five women passing a very special automobile from one of them to the other, moving from one state to the next until the car is returned to its rightful owner--the sole guy among the six teenagers who called a junkyard back in California home for a couple of years. Maybe it's that every book has featured a different story line between the main couple, yet everyone remains tied to each other through love and friendship. Or maybe it's simply the fact that Devney Perry is as gifted as she is, and somehow, her Runaway series, like those that came before it, know the way to my heart, tugging at my heartstrings every single time. It started with Runaway Road, continued with Wild Highway, and then with Quarter Miles. Now, we make our way towards Arizona with an enemies-to-lovers tale in Forsaken Trail.
Thirty-year-old Aria Saint-James's life changes after a trip to Arizona to visit her twin sister, Clara, and nephew, August, ends with a drunken one-night stand. To make matters worse, the man she slept with was someone she couldn't stand--Clara's thirty-four-year-old boss, Broderick Carmichael. An added complication comes a couple of months later, and if things were already interesting before said complication, aka a surprise pregnancy, it definitely becomes more fascinating as readers see these two would-be parents try to create some sort of a foundation for themselves. I loved that Aria was independent and had principles but was also willing to compromise when needed. Then there was Brody, who was quite set in his ways, yet he was also someone simply looking for love and family--just like Aria. These two were well matched, and I enjoyed their banter and bickering as much as I did their quieter and more sublime moments. Forsaken Trail gets five stars. Now, the Cadillac heads towards its final destination: Elyria, CA. So bittersweet!
------------------------