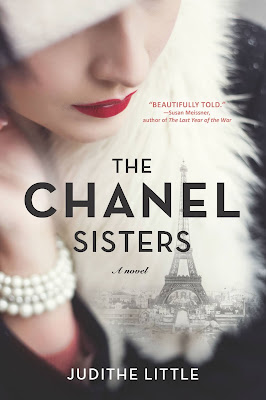 The Chanel Sisters
by Judithe Little
Date Released: December 29, 2020
Graydon House Books
About The Chanel Sisters
For fans of The Paris Wife, The Only Woman in the Room, and The Woman Before Wallis, a riveting historical novel narrated by Coco Chanel's younger sister about their struggle to rise up from poverty and orphanhood and establish what will become the world's most iconic fashion brand in Paris.
A novel of survival, love, loss, triumph—and the sisters who changed fashion forever
Antoinette and Gabrielle “Coco” Chanel know they’re destined for something better. Abandoned by their family at a young age, they’ve grown up under the guidance of nuns preparing them for simple lives as the wives of tradesmen or shopkeepers. At night, their secret stash of romantic novels and magazine cutouts beneath the floorboards are all they have to keep their dreams of the future alive.
The walls of the convent can’t shield them forever, and when they’re finally of age, the Chanel sisters set out together with a fierce determination to prove themselves worthy to a society that has never accepted them. Their journey propels them out of poverty and to the stylish cafés of Moulins, the dazzling performance halls of Vichy—and to a small hat shop on the rue Cambon in Paris, where a boutique business takes hold and expands to the glamorous French resort towns.
But the sisters’ lives are again thrown into turmoil when World War I breaks out, forcing them to make irrevocable choices, and they’ll have to gather the courage to fashion their own places in the world, even if apart from each other.

An Excerpt from The Chanel Sisters
IN LATER YEARS, I WOULD THINK BACK TO THAT COLD MARCH day in 1897 at the convent orphanage in Aubazine.
>We orphelines sat in a circle practicing our stitches, the hush of the workroom interrupted only by my occasional mindless chatter to the girls nearby. When I felt Sister Xavier’s gaze, I quieted, looking down at my work as if in deep concentration. I expected her to scold me as she usually did: Custody of the tongue, Mademoiselle Chanel. Instead, she drew closer to my place near the stove, moving, as all the nuns did, as if she were floating. The smell of incense and the ages fluttered out from the folds of her black wool skirt. Her starched headdress planed unnaturally toward heaven as if she might be lifted up at any moment. I prayed that she would be, a ray of light breaking through the pitched roof and raising her to the clouds in a shining beam of holy salvation.
But such miracles only happened in paintings of angels and saints. She stopped at my shoulder, dark and looming like a storm cloud over the sloping forests of the Massif Central outside the window. She cleared her throat and, as if she were the Holy Roman Emperor himself, made her grim pronouncement.
“You, Antoinette Chanel, talk too much. Your sewing is slovenly. You are always daydreaming. If you don’t take heed, I fear you will turn out to be just like your mother.”
My stomach twisted like a knot. I had to bite the inside of my mouth to keep from arguing back. I looked over at my sister Gabrielle sitting on the other side of the room with the older girls and rolled my eyes.
“Don’t listen to the nuns, Ninette,” Gabrielle said once we’d been dismissed to the courtyard for recreation.
We sat on a bench, surrounded by bare-limbed trees that appeared as frozen as we felt. Why did they lose their leaves in the season they needed them most? Beside us, our oldest sister, Julia-Berthe, tossed bread crumbs from her pockets to a flock of crows that squawked and fought for position.
I pulled my hands into my sleeves, trying to warm them. “I’m not going to be like our mother. I’m not going to be anything the nuns say I’m going to be. I’m not even going to be what they say I can’t be.”
We laughed at this, a bitter laugh. As the temporary keepers of our souls, the nuns thought constantly about the day we would be ready to go out and live in the world. What would become of us? What was to be our place?
We’d been at the convent for two years and by now were used to the nuns’ declarations in the middle of choir practice or as we worked on our handwriting or recited the kings of France.
You, Ondine, with your penmanship, will never be the wife of a tradesman.
You, Pierrette, with your clumsy hands, will never find work with a farm woman.
You, Hélène, with your weak stomach, will never be the wife of a butcher.
You, Gabrielle, must hope to make an adequate living as a seamstress.
You, Julia-Berthe, must pray for a calling. Girls with figures like yours should keep to a nunnery.
I was told that if I was lucky, I could convince a plowman to marry me.
I pushed my hands back out of my sleeves and blew on them. “I’m not going to marry a plowman,” I said.
“I’m not going to be a seamstress,” Gabrielle said. “I hate sewing.”
“Then what will you be?” Julia-Berthe gazed at us with wide, questioning eyes. She was considered slow, “touched,” people said. To her everything was simple, black and white like the tunics and veils of the nuns’ habits. If the nuns said it, we would be it.
“Something better,” I said.
“What’s something better?” Julia-Berthe said.
“It’s…” Gabrielle started but didn’t finish.
She didn’t know what Something Better was any more than I did, but I knew she felt it just the same, a tingling in her bones. Restlessness was in our blood.
The nuns said we should be content with our station in life, that it was God-pleasing. But we could never be content where we were, with what we had. We came from a long line of peddlers, of dreamers traveling down winding roads, sure that Something Better was just ahead.
Excerpted from The Chanel Sisters by Judithe Little
Copyright © 2020 by Judithe Little.
Published by Graydon House Books.