Review: Destroyed with You by J. Kenner (Stark Security #5) 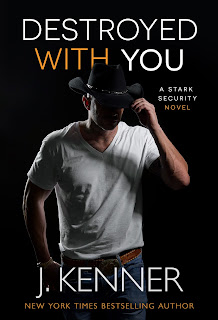 Note: An advanced reader copy (ARC) was provided by the author via Wildfire Marketing Solutions.
J. Kenner returns to her Stark Security series with the fifth book, Destroyed with You, which is a second-chance romance with a whole lot of suspense added to it. Winston Starr has spent the past four years mourning the loss of his beloved wife--his Linda. He's moved forward with his life, at least professionally, leaving behind Hades, Texas for Los Angeles, California to became part of the impressive team at Stark Security. When he receives a call from his mentor and former boss, he's intrigued; but when he realizes why he's been requested for a particular mission, he's shocked by the truths that bombard him. Linda is alive, and learning that she faked her death and what she's been up to since destroys him in a way worse than when he believed her to be dead. He wants answers, but when she's forced to go on the run, will her betrayal stop him from following along?
This newest installment is one of my favorites in the Stark Security series. I loved how J. Kenner was able to keep the story going at a steady clip, never faltering when it came to how the main characters would be able to deal with the past and decide if they wanted to reclaim the future that they thought was lost to them forever and how they would figure out who the true bad guys were and how they would bring them to justice. There was this constant thrum of tension that I absolutely savored, especially because it was done as well as it was in this book. Then there were the main characters, who had such strong personalities, and their interactions, even the ones were it was like they were simply basking in the presence of one another, were pure romance enjoyment on my end. Like everything else in the Stark world, Destroyed with You doesn't disappointment. Five stars.
--------------------------

Read my reviews for the Stark Security series: