Review: View with Your Heart by L.B. Dunbar (Heart #5) 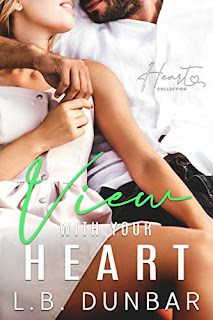 "I'm sorry I haven't been better." A better son. A better brother. A better person to Britton.

I wish I'd known I was going to need tissues while reading this book because I had to put my tablet down once the tears came and search for the nearest box of tissues in my room. View with Your Heart is the fifth novel in L.B. Dunbar's Heart series, and this second-chance romance tugged at my heartstrings while also making me feel like I was on an emotional roller coaster. A quick note: Originally released a few years ago under the title Touch Screen and as part of the Senses series, this title has been revamped and includes new content, so if you read its original incarnation, you may want to read this newer one.
They met when he was eighteen and she was sixteen, and over one summer, Gavin Scott and Britton McKay fell in love. The two teenagers had no choice but to part ways--she to her hometown, and he off to college. Their paths would cross again a few years later, only for them to go their separate ways once again as she had a career in dance in New York and he his baseball career in California. It's been twenty years since Gavin returned to his hometown of Elk Lake in Michigan, but his best friend's impending nuptials have him making the trip back. This was the place he once called home--the same place where he fell for Britton. He expects awkwardness from family and friends he left behind, but what he doesn't expect is that Britton is a widow with a son and considers Elk Lake City home.
I confess I wasn't a huge fan of Gavin's for quite a few chapters in the book. That doesn't mean that Britton was faultless because the secret she kept from Gavin is the sort of secret that I believe should never be kept unless under the most extenuating of circumstances. All that being said, I found myself cheering these two on, wanting them to get their respective acts together because it was clear they were meant to be. I did appreciate that they actually led good lives while apart since I'm not one to insist that the main characters in the romances I read remain chaste and celibate in their years of separation. As for the rest of the characters, I liked them all, but Britton's seventeen-year-old nephew, Theo, was a scene-stealer, and I've got my fingers crossed we get his story somewhere down the road. Same with Gavin's sister, Karyn, and her husband, Tom. You'll see what I mean when you read the book. And you should. Read View with Your Heart, I mean, because it reminds us of the power of love, family, and forgiveness. Five-plus stars.
-------------------------

Read my reviews for the Heart series: