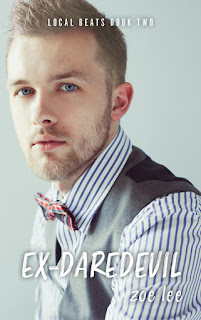 Note: An advanced reader copy (ARC) was provided by the author via Gay Romance Reviews Tours & Promo.
Ex-Daredevil is the second novel in the Local Beats series from Zoe Lee, and while the main characters from the series starter, Ex-Bandmates, do pop in here, the new book is a complete standalone. That being said, I recommend you check out the first book as well because it was really great introduction, not only to this new series, but to the author, too.
When twenty-four-year-old personal assistant to a rock star Gavin Sycamore nearly crash lands on thirty-four-year-old lawyer Eliott Navarre's car, there's instant attraction. A quick hook-up in a diner restroom left a lasting impression on both, but they were never going to see each other again. But a call and fate had other plans for these two opposites.
This was an entertaining read. Eliott and Gavin may have appeared like they were very different guys, but these two had a few things in common as well. There were insecurities on both sides brought about by things in their respective pasts. This led to A LOT of back and forth in their relationship, but Ex-Daredevil was still a strong our-starred romance.
--------------------------
Read my reviews for the Local Beats series: