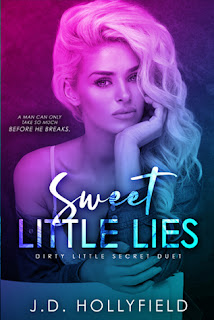 Note: An advanced reader copy (ARC) was provided by the author via Wildfire Marketing Solutions.
Sweet Little Lies is the second book in the Dirty Little Secret duet penned by J.D. Hollyfield. Each book is about a forbidden romance with an age-gap aspect to it, and because there's a different couple for each one, they can be read independently of each other. That being said, because of the ties between the main characters in both books, I'm going to recommend that you read them in order: Bad Daddy (Violet...yeah, I still don't know what her last name is...and Heath Winters) and Sweet Little Lies (Hazel Winters and Gabriel Walker--Hazel is Heath's daughter and Violet's roommate, while Gabriel is Heath's best friend), respectively. They're not long books, so you can read them in a day.
From this point onwards, I may mention things that may prove to be spoiler-like for those who have yet to read the first book, so consider yourselves forewarned. If you've read Bad Daddy, then you'll remember that cliffhanger that hinted that there was something going on between Heath Winters's eighteen-year-old daughter, Hazel, and his best friend, Gabriel Walker, who I'm guessing is more or less in his late thirties or early forties, like Heath. Another thing that was gleaned in the first book was that Gabriel was into BDSM, a kink that Heath was also rather into, but maybe not as heavily into it as his best friend.
This was a good read, one with a whole lot of steam in it. The whole taboo aspect was intriguing, although just like with the first book, I was feeling iffy on the romance part of the relationship. Heath's reaction to learning about what was going on between Hazel and Gabriel was pretty much expected--though a wee bit hypocritical, if you ask me--but still entertaining. A portion of the story does overlap with the events in the first book, but it was interesting to see things from Hazel's persepective. Sweet Little Lies gets four stars.
-------------------------
Read my reviews for the Dirty Little Secret series: