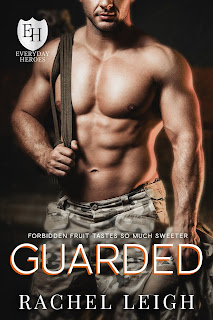 Note: An advanced reader copy (ARC) was provided by the author via Candi Kane PR.
Rachel Leigh is a new-to-me author and Guarded is my first read from her. This book is part of K. Bromberg's Everyday Heroes World, and is a quick enough read, feeling more like a novella. This has a bit of a forbidden romance feel to it alongside the enemies-to-lovers trope. When we meet Nash Whitmore, he's deployed and counting the days until he can be with his beloved wife, Gemma, back in their home in Sunnyville. Then he receives devastating news--his Gemma is gone, and he's to return to Sunnyville to lay her to rest. With her parents already deceased, his wife only has two other family members--her Aunt Lori and her younger sister, Rowan, but the latter is nowhere to be found during the funeral. Three months, she suddenly shows up at Nash's home, and he makes it clear he doesn't want her around. However, Gemma had other plans for both of them.
Let me begin by saying that I know there are some readers who weren't a fan of the whole widower and sister-in-law getting together aspect of the story because it felt taboo to them. I'm not one of those people, mainly because it wasn't as if there was some nefarious seduction going on and Nash was, for all intents and purposes, a single man. Having said that, it took most of the book for me to really feel any romantic connection between Rowan and Nash. There was quite a bit of animosity between them in the beginning, and the transformation of their relationship felt abrupt and forced at times, rather than something more organic. The ending was quite sweet, with the kind of sentimentality that I like and a wrapping up of everything and seeing the main characters creating a future together. Taking everything into consideration, Guarded gets 3.5 stars.
Date Read: 10 December 2020
Learn more about Rachel Leigh.
Purchase Guarded on Amazon.