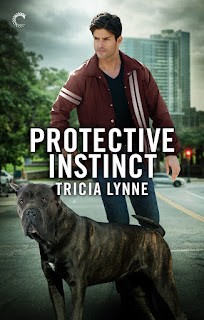 Note: An advanced reader copy (ARC) was provided by Carina Press.
It's been over a year and nine months since Tricia Lynne released her debut novel, Moonlight & Whiskey, and had me taking note of her as one of the new authors to keep an eye out for in the years to come. I'm thrilled she's finally got her sophomore release out, and the best news is that it's the first in a new series! Yay! If the rest of the books are as fabulously entertaining and heartwarming as this first one, then dare I say that the Unlovabulls series is already one of my most anticipated reads for next year and beyond.
Protective Instinct is the first novel in the Unlovabulls series. It features a certified canine behavior specialist and a pro football player. (And dogs. Several of them. Squee!) Liliana Costello and Brody Shaw have known each other for a few years, what with her being the Dallas Bulldogs's team manager's stepdaughter, and him being one of the team's veteran star players. There's always been a pull between Lily and Brody--one neither has acted on. But when Brody finds an abandoned dog from a puppy mill, his protective instincts are triggered--both by the precious dog and the fiery woman who open his heart to more.
Fantastic writing, an intriguing story line, and an awesome cast of characters? Yes, please! From a promising first-time author last year, Tricia Lynne continues to impress with writing that showcases sharp wit, smooth development for both the story and characters, and a fine balance of romance and suspense. I loved that this was a book that had layers to it, one that tackles a subject matter--puppy mills--that gives you pause to examine your own thoughts and emotions regarding it. The dogs, CC, Mack, and Jet, were as much scene-stealers as they were characters who stole my heart. I look forward to seeing what Lynne has next for the Unlovabulls series . Five stars go to Protective Instinct.
Date Read: 20 December 2020
Learn more about Tricia Lynne.
Purchase Protective Instinct on Carina Press | Amazon | Apple Books | B&N | Kobo.