Review: Not What I Expected by Jewel E. Ann 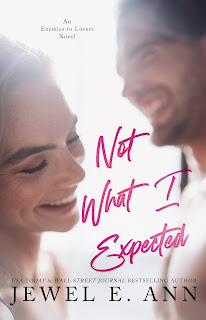 Note: An advanced reader copy (ARC) was provided by the author via Valentine PR.
If it's one thing I've learned in the years since I picked up my first Jewel E. Ann book, it's to expect the unexpected. She doesn't do cookie-cutter, and the latest bit of evidence comes in the form of her newest standalone, Not What I Expected. After over twenty-two years of marriage and four children, forty-two-year-old Elsie Smith is facing a new era in her life. When she meets the new guy in town, he throws her for a loop. Kael Hendricks is twelve years her junior, has no qualms living his life the way he wants, and just happens to be a new business owner that's of great service to the community--and it's a business that's in direct competition with the business owned by Elsie's family. To further complicate things, the attraction between Kael and Elsie is irrefutable and he makes her want to throw caution to the wind. Is this an early midlife crisis or something far more wonderfully unexpected? Can Elsie take a risk on a guy who doesn't believe in marriage?
This was quintessential Jewel E. Ann, which may sound funny since she isn't the sort of writer you can peg under one category or genre. I guess what I'm saying is that Ann's writing always has this bit of quirk to it, with all the elements balanced, making for, at its most basic, entertaining fare. But she never fails to showcase the heart of her stories, and this book was very much having main character Elsie rediscover not just her own heart--what makes it skip a beat and pound faster--but her mind, body, and soul as well. This isn't your typical romance, but then if you're familiar with this author's work, you know that "typical" is a term not commonly associated with her writing. I loved seeing Elsie's growth and evolution, and how Kael was a game changer but encouraging Elsie to always put herself first. Elsie is an inspiration and her story is a reminder that change is inevitable and not necessarily a bad thing either. Not What I Expected receives five stars.
Release Date: 06 December 2020
Date Read: 06 December 2020
Learn more about Jewel E. Ann.
Purchase Not What I Expected on Amazon.