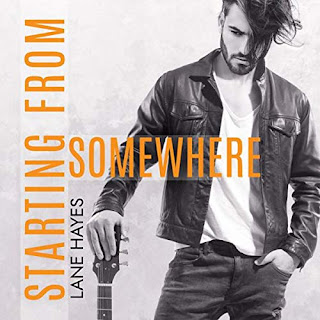 Note: An advanced reader copy (ARC) was provided by the author via IndiGo Marketing & Design.
Starting from Somewhere is the newest audiobook in the Starting From series penned by one of my favorite go-to M/M romance authors Lane Hayes, and narrated once again by the talented Michael Dean. In ebook form, this is novella in length, so as an audiobook, it clocks in at about three and a half hours. This is also a standalone, but there are recurring characters, and the three audiobooks that come before this latest one were great listens, so I certainly hope new listeners will check those stories out before or after.
Starting from Somewhere is the story of a rock star and a geek. Robert James Prescott, better known as Bobby J to his friends and fans, isn't the type to be hampered down by plans. He's changed course more than once, following his heart and where his passion takes him. Being a guitarist for band on the rise Jealousy gives him purpose and a new dream. Then he meets twenty-four-year-old Cody Fletcher, a recently graduated student from grad school with a job in NASA waiting for him. He also happens to be the new intern at Scratch Records. Cody tells Bobby J he's doing research on stuff he wants to do before he starts work, and the older musician is more than happy to help him check things of his list. Falling in love with a hot rock star, though, was never on that list of his.
Low on angst and high on charm and romance, this newest addition to the Somewhere From series was one that I enjoyed. Main characters Bobby J and Cody were easy to like, and I loved getting to know them better. They may have come off as opposites in the beginning, but these two had far more in common than even either of them realized. As always, catching up with the other couples was a bonus, and I'm looking forward to even more from this series, with fingers crossed that Johnny and Topher get their own stories. Michael Dean, as always, did not disappoint, bringing Bobby J and Cody's fun-filled romance and Lane Hayes's writing to life. I'm giving Starting from Somewhere five stars.
Date Listened to: 12 December 2020
Learn more about Lane Hayes.
Learn more about Michael Dean.
Purchase Starting from Somewhere on Audible.