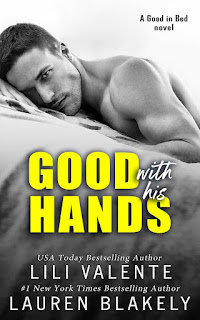 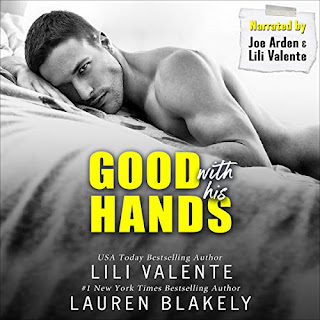 Note: An advanced reader copy (ARC) and the audiobook were provided by the authors.
Two of my favorite go-to authors have joined forces once again as Lili Valente and Lauren Blakely launch their new series, Good in Bed. Their opening salvo is a falling-for-your-best-friend's-sibling (or conversely, falling-for-your-sibling's-best-friend) romance, and it's entitled Good with His Hands. If I could add a sub-heading to that, it would be "Oh so good" because this book was exactly that. Here we've got twenty-seven-year-old artist  and business manager of their family-owned pie business Ruby Valentine and thirty-year-old mechanic and garage owner Jesse Hendrix. This isn't your typical story that falls under this particular trope. It's mostly lighthearted but it does have a sprinkling of angst.
Ruby was the best friend of Jesse's younger sister, Claire, and two years ago, what was supposed to be an amazing adventure together ended in tragedy when an accident left Ruby seriously injured and Claire gone to them forever. Then Jesse tells Ruby he's found a list Claire created just for her to help push her out of her comfort--aka safe--zone. He even offers to be the buddy who'll assist her in check off each item on the list. With only two weeks to do it all because Jesse is leaving New York for California, will there be enough time to go through the list? It looks like it may take less than that for them to fall in love...
There was more to this book than the usual story line of one main character falling in love with the sibling of their best friend and how they keep it a secret from the person that ties them together. There IS a secret that's being kept here, and I suspected what it was based on my own curiosity as to the catalyst of what brings Jesse and Ruby together. That didn't lessen my anticipation in seeing how it would all play out and how everything would be resolved. One of my favorite things when it comes to Lili Valente's and Lauren Blakely's respective work as solo authors is that they don't prolong that particular agony.
As for the audiobook, the pairing of Lili Valente and Joe Arden was sheer genius. I couldn't help but wonder why the heck these two had never headlined an audiobook in the past. Yes, they were both part of Lauren Blakely's full cast production of Instant Gratification, but as a pair, Good with His Hands is the first time where it was just the two of them. I've loved listening to them with other narrators in the past, and after having listened to them together on this book, I can now add them as one of my favorite pairings.
It may be weird for some that I actually like experiencing a story through two mediums--eBook and audio, in this case--at the same time, but I seriously do. Maybe it's just me, but it's as if I become more immersed in the story and the characters. Valente and Blakely clearly click as a writing twosome. I'm not sure if each one had a particular main character they wrote for or how their writing process was, and that's saying something because there was such a seamless feel to it all. Good with His Hands easily gets five stars.
Release Date (eBook): 18 December 2020
Date Read and Listened to: 15 December 2020
Learn more about Lili Valente and Lauren Blakely.
Learn more about Joe Arden and Lili Valente.
Purchase Good with His Hands (eBook) on Amazon | Apple Books | B&N | Kobo.
Purchase Good with His Hands (audiobook) on Audible.