Review: Caught in the Chase by Kacey Shea (Caught #3) 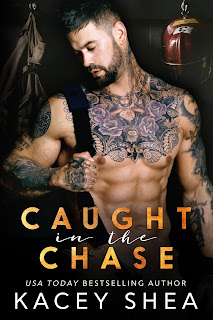 Note: An advanced reader copy (ARC) was provided by the author.
Caught in the Chase is the third novel in the Caught series from Kacey Shea. While each novel may be read as a standalone, the first two, Caught in the Flames and Caught in the Lies, were good reads, catching up on them won't be a burden. Also, there are recurring characters, so the ties between each book are there even if these three books may be read independently of one another. Bonus: the series is on Kindle Unlimited, so if you're a subscriber, go download the books and read them as part of your membership. Having said that, fair warning: the new book is the first in a duet involving the same couple, and there's a cliffhanger, although not an evil one. The conclusion releases in March of 2021.
Caught in the Chase is a romance that had an enemies-to-lovers vibe to it. The main characters are Chase Matthews and Alicia Martin, who were featured prominently in the first series, starter, Caught in the Flames. There isn't a whole lot of love lost between the two, and it may seem like neither one has anything in common with the other. However, they actually do have a couple of things in common, most notably, and sadly, it was this: addiction. As much as Alicia wishes she had nothing to do with him, she can't help but reach out and offer her help to Chase. They grow closer as they spend the summer in the Outer Banks, but could catching feelings for Chase end up costing Alicia a broken heart?
This turned out to be a really angst read, and you certainly won't hear me complaining, not when I happen to be addicted to angst AND when it's incorporated as well as it was here. Kacey Shea has written a romance that tugs on your heartstrings while also giving you pause, or at least it did in my case. Alicia was such a strong female main character, but even as she was helping Chase with his demons, she still had to actively battle her own. Shea didn't sugarcoat the difficulties that an addict experiences, but she also highlights the power of love and how it can serve as inspiration to face up to any challenge before us. Five stars go to Caught in the Chase; the wait begins for Caught in Us.
Date Read: 19 December 2020
Learn more about Kacey Shea.
Purchase Caught in the Chase on Amazon.