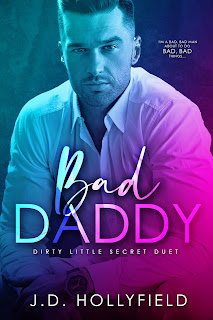 Note: An advanced reader copy (ARC) was provided by the author via Wildfire Marketing Solutions.
Bad Daddy is the first in the Dirty Little Secret duet from J.D. Hollyfield, but this novella is a standalone, with the main characters getting their happily-ever-after and the ending giving readers a teeny, tiny idea what and who the second book is about. We're introduced to eighteen-year-old Violet (whose last name I don't recall being mentioned, but if it was, please feel free to leave me a comment to let me know what it is!), a college freshman who meets her new roommate, Hazel, and develops lustful feelings for Hazel's father. Heath Winters, who I'm guessing is in his mid to late thirties considering Hazel guesses and he hints at being twice her age, knows he shouldn't fantasize about his daughter's roommate. She's too young, and she probably wouldn't even be interested in his kinks. But she's persistent and far too tempting, and Heath never said he was a saint.
If you like your reads with the heat level set to sweltering and love some kink thrown into the mix, then this quick read could be right up your alley. It's clear from the get-go that Violet and Heath are attracted to each other, and the whole idea of their attraction being forbidden because of the age difference and the fact that Violet is Hazel's roommate and becomes her friend further complicates things. There's also the added entanglement of a young professor who has a thing for Violet. So, this was definitely an interesting read, one that isn't "just" about the whole element of the forbidden. Oh, there was sex, and quite a bit of it, but there was an honest-to-goodness story, one that had a fair amount of angst to it (yay!). While I may not be a fan of a teen seducing their friend's parent, this is fiction, and it was well-written fiction at that. Four stars go to Bad Daddy.
Release Date: 07 December 2020
Date Read: 06 December 2020
Learn more about J.D. Hollyfield.
Purchase Bad Daddy on Amazon.