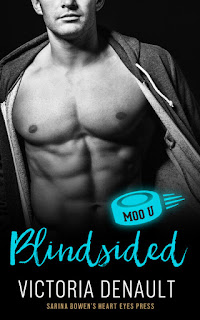 Note: An advanced reader copy (ARC) was provided by Heart Eyes Press.
Sarina Bowen's beloved World of True North kicks, or rather, skates off with the first multi-authored spin-off series, Moo U, which features the players of Burlington University's hockey team. Book one is Blindsided penned by Victoria Denault, who is known for her Hometown Players and San Francisco Thunder hockey romance series. This is an enemies-to-lovers romance, one between two people belonging to rival families who just happen to be next-door neighbors. Then things begin to shift after one drunken altercation between their grandfathers, plus maybe a minor act of half-naked blackmail.
Tate Adler and Magnolia Todd, both nineteen and sophomores who go to Vermont's Burlington University, aka Moo U, don't like each other, and it's a feeling that's been passed down through three generations. Neither one has any firm details as to what caused the rift between their grandfathers, but at this point, that hatred and distrust runs deep. When the Todd Farm lose the last booth in the Fall Farmers Market to their arch nemesis, it's a painful pill for them to swallow; but when Maggie inadvertently discovers a secret Tate is trying to hide, she uses the knowledge as prime blackmail material to get a shared spot in the booth. Could this be the surprising beginning of a fiery frenemyship?
I did a quick check and just realized that it's been about four years since I last read something from Victoria Denault. Sad but true, yet I'm really happy the opportunity to re-acquaint myself came my way. I seriously enjoyed this initial venture into the much-awaited World of True North book universe. The dislike between the Todds and the Adlers was very real, so the whole enemies-to-lovers aspect of Maggie and Tate's story wasn't some put-upon thing. I thoroughly enjoyed bearing witness to the evolution of their relationship, and how their coming together became the impetus of everything else that followed with regards to the feud between their families. Victoria Denault has set the bar high for the rest of the books to follow in the Moo U series! Blindsided receives five stars.
Release Date: 15 February 2021
Date Read: 14 February 2021
Learn more about Victoria Denault.
Pre-order Blindsided on Amazon.