Review: Only Once by Ashley Munoz 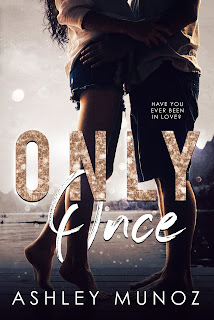 Note: An advanced reader copy (ARC) was provided by the author via Wildfire Marketing Solutions.
Only Once is my second read from Ashley Munoz, and it exceeded all my expectations. This is a second-chance romance about college sweethearts who went their separate ways only to cross paths again a decade later. Bexley Black and Ryan Prince were young and in love in college, but while Ryan prioritized his dreams of becoming a professional football player above anything and anyone else, Bexley realized it was time for her to move forward with her own life. She went on to marry and have two kids, but as much as her husband loved her, things didn't work out. On the other hand, Ryan's football ambitions were not to be, instead becoming a highly successful actor. When he returns to his hometown for a vacation, neither one expects to see the other and long buried feelings and emotions come rushing back. Is this their chance for closure or a chance at forever?
This was an engrossing read, one that I enjoyed from start to finish. It was interesting to see how much growth had occurred from the time that Bexley and Ryan were together as college students to who they are as thirty-year-olds. Somewhat like the main characters in my first Ashley Munoz read, these two could have benefited from some open and honest communication, but my level of frustration here wasn't even at par to before. I felt like I understood Bexley and Ryan better--what motivated them to make the choices that they did. Were those choices always right? Nope, but I had a better appreciation for their actions and reactions. The supporting cast of characters was memorable, especially Bexley's kids and ex-husband and Ryan's parents. From start to finish, I was entertained, and the grand gesture and the epilogue had me wholly smitten. 4.5 stars go to Only Once.
Date Read: 13 February 2021
Learn more about Ashley Munoz.
Purchase Only Once on Amazon.