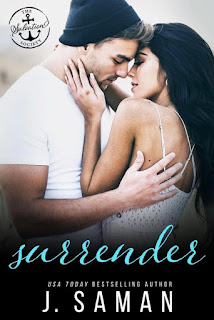 Note: An advanced reader copy (ARC) was provided by the publisher via Candi Kane PR.
One of my favorite things about all the books being released that are inspired by another author's established world or universe is discovering new-to-me authors. This time around, it's J. Saman, and she's someone whose work I've come across on Goodreads or event sign-ups for her new books. Because Surrender is a standalone--although it does feature characters from Corinne Michaels's Salvation book universe and is a crossover from Saman's own Las Vegas Sin series--I felt this was the best time to check out Saman's writing, and I certainly was NOT disappointed. It's quite clear that I've been missing out!
Surrender is a romantic suspense read with a touch of second-chance romance to it. Kellin Shaw is a former member of the US Army turned agent for the Central Intelligence Agency. After a mission gone wrong raises his hackles, he returns to his home state of Virginia in hopes of getting answers as well as some time with his sister. The last thing he expects is to come face to face with Alanna Contreras. It's been nearly a decade since they shared one unforgettable kiss and made promises to see each other the next day--only she never showed. Years may have passed but that connection still feels as strong as ever. But can anything come of it with Kellin being a CIA agent and Alanna being a busy doctor?
This was a fairly quick read, but so much happened nonetheless. I liked seeing how Kellin and Alanna reconnected, knowing that the chemistry was still there but realizing that they were different--he was no longer in his early years in the Army and she was no longer a college student. That feel of suspense was quite entertaining as well, almost as if it amped up the romance aspect of the story. After reading Surrender, it's clear I've got some catching up to do with as far as J. Saman's back list is concerned, while also being quite excited for her upcoming series starter featuring Dr, Carter Fritz. This gets 4.5 stars.
Date Read: 12 February 2021
Learn more about J. Saman.
Purchase Surrender on Amazon.