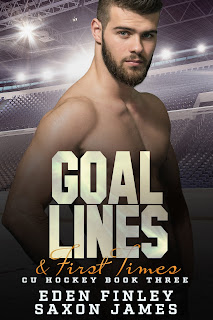 Note: An advanced reader copy (ARC) was provided by the authors via Foreword PR & Marketing.

Einstein: Are you sure you want to waste your time on me when I'm probably a lost cause? You may never get sex stuff from me.

Richie: YOU may never get stuff from ME. This is supposed to be about finding shit out about ourselves, right? Theoretically, I'm bisexual. I get off to the thoughts of guys. In practice... I'm not ready to go there yet. Maybe we can take the baby steps together?

I guess it would be fair to say that I'm rather addicted to the CU Hockey series. Eden Finley and Saxon James have repeated brought the romance AND the sport to this sports romance series, and they do not skimp on the wit, humor, and heat plus a sprinkling of angst. The third book, Goal Lines & First Times features two main characters who are beginning to realize that they may not be as straight as they thought themselves to be. Richard Cohen, aka Richie to his family and best friend and Cohen to his teammates, is twenty-four and is trying to come to terms with two self-discoveries: playing professional hockey may not be in his future and he could very well be bisexual. On the other hand, Seth Grant is twenty-two and going through a break-up where his ex-girlfriend has him researching demisexuality. It would help if each had someone to talk to, but who would have thought they would get exactly that--and maybe even more--on an app for hookups?
This book was an awesome read, and a lot of that had to do with the fact that I could relate to several aspects of it, especially with how comfortable Richie and Seth were with each other online. Anonymity oftentimes allows us to be more open because the fear of rejection isn't as strong because we're able to hide something essential about ourselves from the other person--our identity. Or maybe that's just me. But I'm happy to say that I've had a select number of people I've been able to connect with online and forged strong friendships along the way. And that was the thing with our main characters: they were able to reach a comfort level with one another minus any of the usual pressures or expectations, and from there, they were able to bond and explore their connection. I loved seeing how Seth figured out who Richie was and then how they nurtured their relationship and accepted who they were. This series better not end any time soon or I may start a petition for Eden Finley and Saxon James to continue with CU Hockey indefinitely. For now, I'll bask in the five-plus-starred-ness that is Goal Lines & First Times.
-------------------------
Read my reviews for the CU Hockey series: