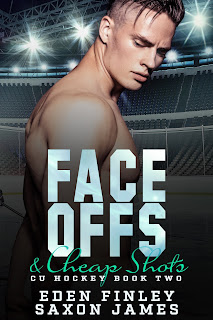 Note: An advanced reader copy (ARC) was provided by the authors via Foreword PR & Marketing.
I've been counting the days ever since Eden Finley and Saxon James announced the release date for the second novel in their CU Hockey series. I loved, loved, LOVED the series starter, Power Plays & Straight As, and have been super eager to see if this then-new writing duo could pull off two fantastic reads in a row. The verdict? Why, yes! Yes, indeed, they pulled it off because Face Offs & Cheap Shots is every bit the M/M hockey romance I was hoping for. Oh, and it employs the enemies-to-lovers and features two teammates who happen to be rivals that're vying for the top spot of CUM...L team captain.
With their previous captain heading off to the professional hockey league, the Colchester University Mountain Lions, aka CUML, are in need of a new one to help lead their team during the next season. The coaching staff has whittled it down to the top two prospects: Christopher Jacobs and Teddy Junior Beckett, better known as Jacobs and Beck. Both are incoming seniors and have been with the team since they were freshmen. Jacobs may be the better player and leader, but Beck's amiable nature and ability to get along with almost anyone--except for Jacobs, it seems--makes him more popular among his teammates. Their personalities and backgrounds couldn't be more different, and choosing between won't be easy. So maybe a few captain challenges will do the trick, but then neither one expected one of those darn challenges would include kissing each other.
Topher and Teddy, I mean, Chris and TJ, erm... Okay, let's stick with Jacobs and Beck... These two, along with the rest of the featured team members of Colchester U's hockey team were entertaining as heck. Their back and forth went from bickering to bantering, and it became part and parcel of the evolution of their relationship as adversarial teammates to kinda-sorta friends who later have benefits and then accidental boyfriends. I genuinely loved getting to know Jacobs and Beck and enjoyed seeing how they became part of each other's support system. I think I know who book three will be about, though, I'll still be excited regardless of who it'll turn out to be. Face Offs & Cheap Shots gets five stars and can be read as a standalone (but go read book one anyway if you haven't yet!).
-------------------------
Read my reviews for the CU Hockey series: