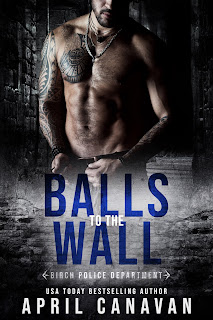 Note: An advanced reader copy (ARC) was provided by the author via Give Me Books Promotions.
When I signed up for the release blitz for Casey Hagen's False Start, there was a note on the sign-up sheet about it being a crossover of sorts with another series starter, Balls to the Wall, and well, I'm glad I signed up for it, too! April Canavan was a new-to-me author going into this book, and color me impressed because this book hit me in the feels from the first chapter onwards. This novel kicks off Canavan's Birch Police Department series, which is a spin-off of her Birch County Blue series and Cocky Corporal, which is part of the Cocky Hero Club multi-authored collection. I haven't read any of those yet (thus the whole new-to-me author thing), but I was still able to enjoy this new book on its own, although all the aforementioned titles are now sitting prettily on my never-ending to-be-read list.
Balls to the Wall is a story of second chances and moving forward. Jeremy Vale Townsend and Parker Jane Hayes were close growing up and were part of larger close-knit circle of friends which included the Hayes siblings--twins Danny and Linc and their younger sister, Emma--Remy's sisters, Casper, Cassie, and Kennedy. Before Remy and the Hayes twins left for military training, Parker offered Remy her heart, and he proceeded to break it when he rejected her. It was Danny who was there to catch her, and one drunken night led to an unexpected pregnancy and Parker becoming Danny's wife...and then his widow. Six years later, Parker's main focus is her five-year-old son, Nox, and while Remy may have returned to their hometown, he's kept his distance...until danger comes for Parker.
This book had some great elements to it. The romance was a given, but there was also a bit of mystery and suspense. What happened between Remy and Parker six years prior changed so much for them. There's a lot more to their story than what you think, especially given that there are a couple of secrets that they've kept from each other all this time. The first chapter had me shedding some tears, and I seriously wish Boo hadn't become a sacrificial lamb--or more appropriately, dog--but I get why the author had to do what she did. There were definitely quite a few notable supporting characters whose stories I can't wait to delve into as the Birch Police Department progresses. Balls to the Wall was a story of love, forgiveness, family, and redemption, and I'm giving it 4.5 stars.
Release Date: 16 February 2021
Date Read: 15 February 2021
Learn more about April Canavan.
Pre-order Balls to the Wall on Amazon | Apple Books | B&N | Kobo.