Review: My Beautiful Neighbor by Piper Rayne (The Greene Family #1) 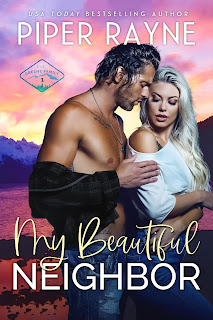 Note: An advanced reader copy (ARC) was provided by the authors via Wildfire Marketing Solutions.
Saying goodbye to the Baileys was quite a difficult feat, what with me having grown so darn attached to the entire family, but the Piper Rayne mentioned that they had a whole new series in the works and it was also about another family living in a neighboring town in Alaska! Welcome the Greenes, and we're moving from Starlight Falls to Sunrise Bay. The townsfolk are just as nosy, although most seem to be of a well-meaning sort of nosiness, and the dynamic senior duo is back, aka Grandma Dori Bailey and Grandma Ethel Greene. With all the Baileys having found love and starting their families, this time around, these grandmas are using their matchmaking skills with Ethel's adult grandkids.
My Beautiful Neighbor is the first full-length novel in Piper Rayne's new Greene Family  series. Cade Greene is the eldest among the Greene siblings at thirty, and he's always felt the weight of responsibility that comes with that role. He co-owns the Truth or Dare Brewery with his stepbrother, Jed, and the two have been thinking of expanding their business. With the building next door standing empty after the death of its owner, Cade and Jed believe they've got a real shot at buying the property. Being friends with the late owner's daughter doesn't hurt their chances either. Then Presley Knight comes into town, and the townsfolk is shocked to find out the Connecticut native's ties to Sunrise Bay and that she's interested in the building Cade and Jed want. Part of him believes keeping his distance is best, but a closed-off part of him wants to get closer to his beautiful neighbor.
Cade and Presley's story was a really good start to this new series. I consider having read the prequel novella, My Twist of Fortune, an advantage because I have a better appreciation for how far Cade and Jed have come in their relationship as friends AND brothers, and there was also a notable blip ten years prior to this novel regarding Cade and Presley. Now, that doesn't mean you need to read the prequel novella. That first meeting between the main characters is mentioned in the full-length novel as well. But it's almost as if these two were fated to cross paths once again, and while it may have seemed that they didn't have notable issues to contend with, Cade had certain deeply rooted things that were making him fear getting too intimately involved with Presley. Speaking of Presley, she was my favorite thing about this book. She was independent and brave and a complete surprise in terms of who she turned out to be, considering I had her pegged as more aloof. Overall, My Beautiful Neighbor was a 4.5-starred read, and I truly look forward to seeing where Piper Rayne takes the rest of the Greene Family series.
-------------------------
Read my reviews for the Greene Family series: