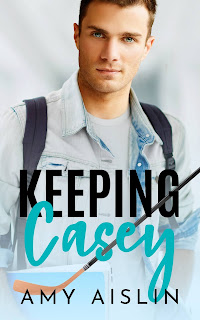 Note: An advanced reader copy (ARC) was provided by the author via Gay Romance Tours & Promo.
Amy Aislin's got a new series, and it feels like a spin-off of her Stick Side hockey romance series and also includes a mention of her Lighthouse Bay holiday romance series. So yes, there are cameo appearances and mentions, but I digress! Keeping Him is a college romance series, or at least that's what I'm assuming because the main characters are college students and the supporting characters who stood out as having potential for their own stories to be told. In short, this is me saying this is all guesswork on my part, so don't hold me to any of it! Whether it's an official spin-off or not, or if it's intended to be a college romance series throughout, it doesn't matter in the long run. Shutting up now...
The first book is a friends-to-lovers romance featuring college students Ethan Rain and Casey Preston. Their friendship spans years, and they've been there for each through, the good times and the not-so-good times. No one knows one quite like the other, but they've both been keeping something from one another--their not-quite-platonic feelings. When Casey finds out that Ethan's being pressured by his hockey team's homophobic captain to be with a girl, Casey offers to help him out--by pretending to be Ethan's fake boyfriend! But what if Casey learns that Ethan wants a real relationship with him? Will Casey's issues with loss and a need for control cost him the one person who means most to him?
This Keeping Him series starter had a slower start than I was expecting given that there was already an established friendship between the main characters. It wasn't till the middle of the book where there was some actual progress on the romantic front for Ethan and Casey. Between the two of them, it was the latter who took a bit for me to warm up to, especially given either his inaction or wrong reaction to certain things. But once they made a real go of evolving from platonic to romantic, everything else picked up. I liked how supportive Ethan and Casey were of each other, and they had a great group of friends, too! I'm giving Keeping Casey four stars, and look forward to book two.
Date Read: 25 February 2021
Learn more about Amy Aislin.
Purchase Keeping Casey on Amazon | Apple Books | B&N | Kobo.