Review: Love Is in the Air: Volume 1 by Various Authors 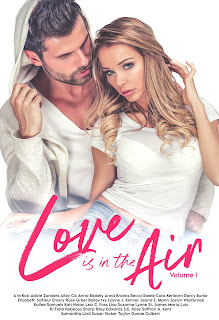 Note: An advanced reader copy (ARC) was provided by the authors via Wildfire Marketing Solutions.
Love Is in the Air: Volume 1 is a new anthology featuring the work of twenty-nine authors and benefits the American Heart Association, whose work and mission you can learn more about on their website. Some of the contributed work in this anthology serve as introductions to upcoming releases from the authors, while others revisit established characters or series that fans and readers may be familiar with. For the purposes of this review, I decided to concentrate on stories from five authors that I've read from and enjoyed in the past: A.M. Kusi, Emery Rose, Saffron A. Kent, Samantha Lind, and Taylor Danae Colbert. I'll delve back into the anthology to check out the others, time permitting!
A.M. Kusi's One Holiday Kiss is a short story in their Shattered Cove series. This friends-to-lovers romance is about Amara and Lyric. They're each other's best friend, and they're spending a couple of days in a mountain cabin with some of Amara's other friends. Both have feelings for one another, but that very real fear of losing the friendship they share has them hesitating to cross the proverbial line. I enjoyed this short, and it did a great job as the lead-in for the anthology, setting the bar high for all the stories to follow. 4.5 stars.
Emery Rose's Stripped Love is an enemies-to-lovers story that introduces readers to Sienna and Asher. Her move from Los Angeles to New York was a promising one, but now, she's not only lost a promotion but she's officially unemployed. Having her nemesis sitting beside her as she tries to drown her sorrows has the potential to make her feel worse...except the gorgeous male stripper intends to make her feel waaay better, if only she'll allow herself to let loose and let go. I seriously loved this, which I believe serves as a prequel for an upcoming full-length novel featuring the twosome. Yay! It snags 4.5 stars.
Saffron A. Kent's Arrow & Salem is, hands down, one of my favorites. The author gives us an extended epilogue of sorts featuring the main characters from My Darling Arrow, the first full-length novel in the St. Mary's Rebels series. Arrow and Salem are just a few days away from their upcoming nuptials, but when Salem's estranged sister, aka Arrow's ex, reaches out, it could be an opportunity for reconciliation...or something else entirely. Salem deserved kudos, and Arrow, well, was very much his Arrow-y self. I love how absolutely devoted and obsessed these two were with each other. This receives five stars.
It's been a while since I last read something from Samantha A. Lind, so reading Just a Kiss was my way of reconnecting with her writing. This short story is part of her Lyrics & Love series, although I'm not sure if it's the first few chapters in the promised full-length version with the same title or a prequel. It's about Allison and Lee, two friends who have been reaping no-strings-attached benefits. He loves being single, but she's hoping for more. This was a pretty good read, and I'm open to reading the novel later on. Four stars.
My last read was Taylor Danae Colbert's Out of the Woods, a standalone short story that takes readers back to Meade Lake, and is my other top favorite in the anthology. Caroline is a teacher headed to Meade Lake for a bachelorette get-together for her best friend. A snowstorm has her driving into a ditch, but she's quickly rescued, not by a knight in shining armor, but a mountain man with a rustic cabin. I loved, loved, loved the connection Caroline and Brew shared, and the twist made for an interesting touch. With a handful of chapters, we get a new and complete romance about an instant connection, close proximity, and one secret identity. I absolutely adored these two. Le sigh. Five stars.
Release Date: 16 February 2021
Date Read: 15 February 2021
Learn more about Greer Bailey, Anna Blakely, Anna Brooks, Darcy Burke, Alley Ciz, Taylor Danae Colbert, Riley Edwards, PJ Fiala, Lexi C. Foss, Cora Kenborn, J. Kenner, Saffron A. Kent, A.M. Kusi, Ivy Layne, Samantha Lind, Maria Luis, Jeana E. Mann, Kait Nolan, Emery Rose, S.E. Rose, Elizabeth SaFleur, Lynne St. James, Kailee Samuels, Rebecca Sharp, Becca Steele, Susan Stoker, Lisa Suzanne, Joslyn Westbrook, and Abbie Zanders.
Purchase Love Is in the Air on Amazon | Apple Books | B&N | Kobo.