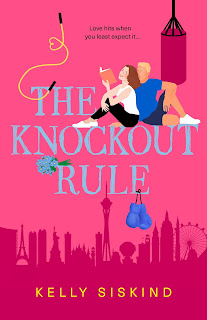 Note: An advanced reader copy (ARC) was provided by the author via Social Butterfly PR.
The Knockout Rule is the fourth novel in Kelly Siskind's Showmen series, and it's my favorite one to date. We have Isla Slade, who grew up knowing how much her father loved her. Another thing she knew while growing up was just how brutal a sport boxing was and how painful the aftermath of each bout was. After all, her father was one of the greats. Now, Isla is a physiotherapist, and she wants to put her knowledge to good use and help athletes heal from their injuries and aches and pains. Well, all athletes except for boxers. So when her father asks for a favor involving her helping out a boxer, Isla is more than just hesitant, but help him she does. Eric Kramarov may be good-looking and a good boxer, but Isla suspects his nickname of "Brick" goes beyond the physical. At least his manager, Preston Church, seems to truly be the brains behind the operation, and he's got a way with words, wooing her quite effectively. But could someone else be behind them?
Isla and Eric's story looks to have been inspired by Edmond Rostand's Cyrano de Bergerac, or perhaps, one of its more modern-day adaptations, except Eric doesn't have an obnoxiously large nose (although Isla may have thought him rather obnoxious in the beginning). I totally understood why Isla had the aversion that she did with boxers in general, but her love for her father superseded that. I loved their relationship! Then there was Eric, and all I can say is...le sigh. Seriously, he's got to be my favorite male main character from Kelly Siskind. There was no doubt that the man had a way with words, but his adoration for and care of Isla brought to mind the saying "Actions speak louder than words." The Knockout Rule was a knockout of a romance read, and it gets five stars.
Release Date: 24 February 2021
Date Read: 24 February 2021
Learn more about Kelly Siskind.
Purchase The Knockout Rule on Amazon | Apple Books | B&N | Kobo.