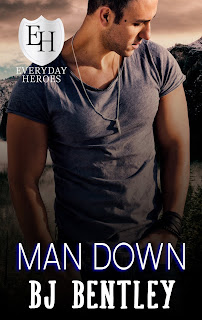 Note: An advanced reader copy (ARC) was provided by the author via Grey's Promotions.
BJ Bentley is a new-to-me author, and her contribution to K. Bromberg's Everyday Heroes World has just become one of my favorite reads from this book universe. I honestly couldn't have chosen a better way to be introduced to an author's writing. Man Down had romance, suspense, action, and mystery and with particularly strong storytelling to back it all up. Readers meet an intriguing cast of characters led by Vance Brody, veteran detective for the Aspen Falls Police Department, and Poppy Leighton, the newest rookie on the force. Vance is known for his maverick ways, so when he gets in trouble yet again, his captain informs him to make up for it, he has to mentor Poppy. As if taking the daughter of someone he considers his hero, one who changed his life forever, he's drawn to the straight-laced, by-the-book rookie. Becoming involved with another cop is more than complicated, especially when Poppy stirs up both Vance's baser and protective instincts, moreso when the prime suspect in their drug case has just set his sights on her.
From the moment Vance and Poppy are introduced on the page and every one thereafter, I was a goner. There was simply no way for me to not be as emotionally invested in these two and their story. I was wholly entertained by the bickering and banter between the main characters. There was always this undercurrent of tension--the best kind of tension!--that I felt as if I was on the edge of my seat throughout, waiting to see what would happen between Vance and Poppy, as well as what would happen next with their case. With the former, there's that delicious bit of anticipation as they grapple with their desires and feelings. It's not a question of will they or won't they, but more of when, and come on already! As far as the case, my one quibble would be that I wish that the identity of the mastermind was revealed because I honestly thought it was one person in particular since they appeared to be the one nobody else liked. That aside, I still absolutely adored reading every single bit of Man Down, which easily receives five stars.
Release Date: 11 February 2021
Date Read: 05 February 2021
Learn more about BJ Bentley.
Purchase Man Down on Amazon.