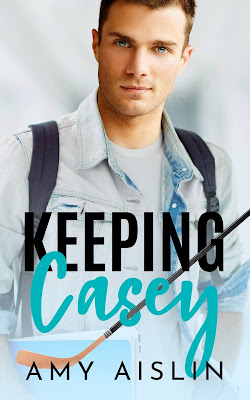 Keeping Casey
(Keeping Him #1)
by Amy Aislin
Date Released: February 23, 2021
About Keeping Casey
Casey Preston is the guy with the plan. The list-maker. The one who micromanages his own life.
Spontaneously offering to be his best friend’s fake boyfriend to get Ethan’s annoying team captain off his back?
That’s not thinking things through. It’s not even smart given Casey’s been fighting his feelings for Ethan for years.
Ethan Rain just wants to play hockey and get his college degree. Adding a fake boyfriend to the mix? He doesn’t need that complication.
If Casey were his real boyfriend, though? If he got to keep Casey forever? Now we’re talking.
But what if Casey doesn’t want to be kept? 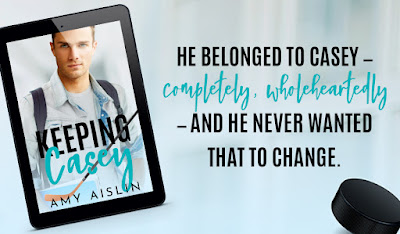 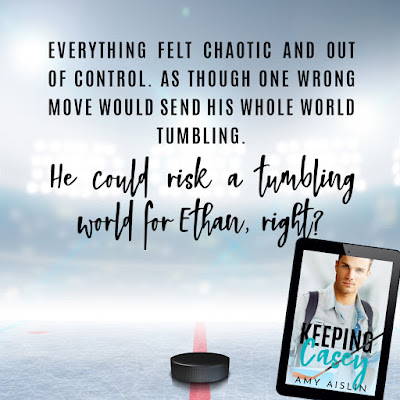 An Excerpt from Keeping Casey
Ethan must’ve made a sound. Casey’s head swung in his direction, gaze examining him head to toe in what had become standard for Casey ever since his dad died—checking Ethan over for injuries after practice.
Apparently satisfied, he smiled wide, making Ethan’s stomach tumble, and said, “Hey. I have things for you.”
“So you said.” Dropping his gear bag and backpack next to the door, Ethan moved Casey’s backpack off his desk chair and sat, discreetly rubbing a wrist while Casey wasn’t looking. Wrapping them for practices and games helped, but they were always sensitive afterward, no matter what. He rubbed the other wrist while Casey’s back was turned.
A rustle drew his attention to Casey. There was a pile of . . . stuff on Casey’s bed. Brochures, flyers, buttons, business cards, even a GH pennant. Two piles, actually. He picked up the second, smaller one and handed it to Ethan. “Thought you might be interested in these.”
Ethan dropped them on the desk and sorted through them. “I don’t really have time for clu— Oh, hey! Cross-Stitch Fun-Stitch?”
“Closest I could find to needle felting.”
“Speaking of.” Digging into the outer pocket of his bag, Ethan came out with a squat, felt owl only a couple of inches tall and as round as a bowling ball. He tossed the white-and-gray bundle to Casey. “Forgot to give this to you earlier.”
“Another hootie for my collection?” Casey placed it on the windowsill where a dozen other little felt owls sat in a row. Ethan had been making them for Casey since he’d started needle felting in high school, and he knew there were probably three dozen more in Casey’s bedroom back home. “I’ve got something else for you too.” From the other pile on the bed, Casey fished out a button and leaned over Ethan to affix it to his T-shirt, over his heart.
Ethan stilled, worried he’d pull Casey onto his lap to nuzzle his neck if he so much as twitched a finger. At the end of the day like this, Casey didn’t smell like anything excerpt something uniquely him and, very faintly, of shampoo. This close, the olive green in Casey’s hazel eyes was more pronounced and Ethan had to resist the pull to poke at the tiny beauty mark on his chin.
“There.” Casey stood back with a grin.
Ethan read the button upside down. I dig you. “Let me guess,” he said with a chuckle. “You joined the Archeology Club.”
“And the Hiking Club. Signed you up for it too.”
“Case—”
“I know you don’t have a lot of free time, but I figured there might be a few outings you could attend. Like, the first event is on a Sunday afternoon a couple of weeks from now. You can come then, right?”
Sundays were free of hockey practice and games, so unless Ethan was traveling back from an away game with his team, he had Sundays off. “Yeah, probably.”
“Cool. I’ll RSVP us.”
Ethan played with his button, the metal making a click-click sound as Casey moved the rest of his stuff off the bed and onto the coffee table. I dig you. It was simply one friend giving it to another. Ethan shouldn’t read anything further into it, even if he desperately wished Casey meant something else.
There were other buttons that Casey had gotten for him too and Ethan parsed through them on the desk.
Keep your ion the prize. He chuckled. Casey must’ve stopped by the chemistry club to pick these up for him.
There was also Make like a proton and stay positive, Chemists in a lab are in their element, I like to hear chemistry puns, periodically, and Forget hydrogen, you’re my number one element.
The last one he pinned to Casey’s backpack. 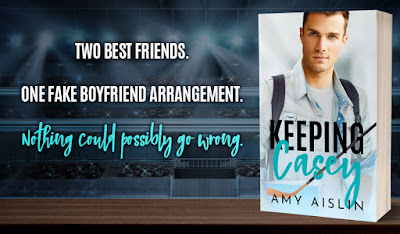 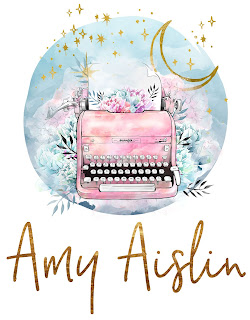 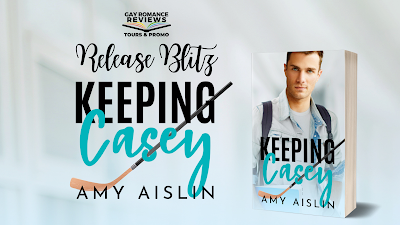