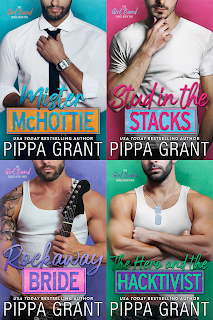 Note: Review copies were provided by the author via Give Me Books Promotions.
I discovered Pippa Grant's writing back in 2018, and my first read from her was Rockaway Bride, and at that time, I had no clue that it was part of an ongoing series! Since then, I've fallen madly in love with the books she's published post-Rockaway Bride, or at least the ones that I've been able to read, i.e. the Happy Cat series (co-authored with Lili Valente), the Bro Code series, Master Baker, and the ongoing Copper Valley Fireballs series. Now, as much as I'm looking forward to Grant's future releases, I love that I'm finally making time to go through her backlist, and since Rockaway Bride was my introduction to her writing, diving into the series it was part was the best way for me to kick things off!
The Girl Band series is about four female friends who are part of a an all-girl boy band cover band: Ambrosia Berger (keyboards), Parker Elliott (guitar), Willow Honeycutt (vocals), and Eloise Jayne (drums). The series is composed of four novels: Mister McHottie (Ambrosia with Chase Jett), Stud in the Stacks (Parker with Knox Moretti), Rockaway Bride (Willow with Dax Gallagher, and The Hero and the Hacktivist (Eloise with Rhett Elliott). Each book is meant to be a standalone, but if you intend to read the entire series, my suggestion would be to read it in order of release to avoid any and all potential spoilers.
All the books have that Pippa Grant humor that I've come to associate with her romances, but each one tells a different story from the one before or after it. Social media manager Ambrosia and billionaire Chase have the whole enemies-to-lovers thing going plus a whole lot of history and are forced to work together when he buys the company she works at. VP for Marketing Parker and librarian and book blogger Knox engage in a fake relationship in time for Parker's high school reunion with the added interesting element of a ten-year age gap and her having been his babysitter. Preschool teacher Willow is kidnapped by rock star Dax in hopes that her groom-to-be will return the money he stole from Dax in exchange for her return. Lastly, computer programmer and hacker Eloise may not want a hero but she gets one anyway in Navy SEAL Rhett, aka Parker's brother.
Among the four, I'd have to say that my favorite would have to be Rockaway Bride, which I enjoyed the first time I read it two and a half years ago and loved re-reading this go-around. Willow and Dax's story is hilarious yet heartwarming and gets five stars. There's a tie for second favorite, with me caught between Stud in the Stacks and The Hero and the Hacktivist. From the age gap to Knox helping Parker see herself in the same light that he does in the former, and how both Eloise and Rhett are good people who adore their siblings and want to rid the world of bad elements in the latter, I was very much entertained. They both get 4.5 stars. Mister McHottie was a hoot, and I hated it just like I hate bacon (which I actually love, so I so do not hate this book... insider joke for readers of this series starter!). Ambrosia and Chase straddled that thin line between love and hate quite well and often. I'm giving them four stars, averaging this series's rating to 4.5 stars.
Dates Read: 21-24 February 2021
Learn more about Pippa Grant.
Purchase the Girl Band series on Amazon.