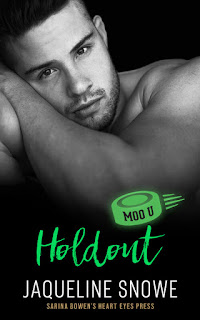 Note: An advanced reader copy (ARC) was provided by Heart Press Eyes.
Jaqueline Snowe is the first new-to-me author I've encountered in Sarina Bowen's World of True North book universe, and Holdout most certainly won't be my last read from her. Hers is the third addition to the Moo U hockey romance series featuring the players of Burlington University's hockey team. This book is a falling-for-a-sibling's-teammate romance, or alternatively, falling-for-a-teammate's-sibling romance. Like the two other books that are part of this first batch of releases, Snowe's can be read as a complete standalone, but do feel free to check Blindsided by Victoria Denault and Slapshot by Rebecca Jenshak to get to know the other couples and get a peek at the other players, too.
Holdout is the story of Jonah Daniels and Ryann Reiner, both nineteen and sophomores studying in Burlington University, which is located in Burlington, Vermont. After Jonah's expected roommate falls through, he places an ad for a new one in hopes of helping with the rent. When the ad is answered, he thinks his new roommate is a guy and fellow Moo U student named Ryan. He was right about them being a student, but it turns out that "Ryan" is actually Ryann--Ryann Reiner, to be exact, also known as the younger sister of the hockey team's alternate captain, Michael. Both on scholarship, the two agree to live together but come up with rules and make promises--two things which are easily broken.
Jonah and Ryann's story was a particularly interesting one, what with two people who seemed to be opposites in terms of personality and how they viewed their respective circumstances. He was quite rigid and overly serious, focusing all his efforts on his studies and playing hockey; and while she was just as studious, she had a brighter and more positive outlook on life, gently prodding Jonah to realize there was more to his life than just hockey. Aside from the expected complication of Ryann being Michael's sister, Jonah's issues with his estranged mother added a layer of complexity that provided some angst--and I do love me some angst, and I quite liked Jaqueline Snowe's Holdout. 4.5 stars.
Release Date: 15 February 2021
Date Read: 14 February 2021
Learn more about Jaqueline Snowe.
Pre-order Holdout on Amazon.