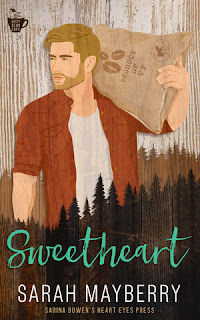 Note: An advanced reader copy (ARC) was provided by Heart Eyes Press.
Sarah Mayberry kicks off the multi-authored Busy Bean series in Sarina Bowen's World of True North collection. Sweetheart is a story of forbidden romance between one woman and her older sister's former boyfriend. Twenty-five-year-old Haley Elliot is the newest barista at Busy Bean, but her true passion is working with leather, creating and designing items like belts, boots, wallets, and the like and selling them on Etsy. When she notices that coffee sales have gone down at Busy Bean, she decides to do a bit of investigating and learns that their competition is selling some truly awesome coffee. She checks out their supplier, Dark Horse Coffee Roasters, and discovers that it's owned by the Beck brothers, one of whom just happens to be her sister, Jess's, ex-boyfriend--twenty-eight-year-old Daniel Beck. Convincing Beck to do business with Busy Bean won't be easy, but Haley may soon realize convincing her heart to not fall for her sister's ex may be close to impossible.
I know that stories where one main character happens to be the ex of someone related to them is a no-go for some readers--although I don't have an issue with it--but I can honestly say that Sarah Mayberry did a great job weaving a romance that I believe would encourage those on the fence to give it a whirl. The main characters were highly likable, both of whom make a number of missteps as they try to maneuver their way around the proverbial elephant in the room: Haley's sister, aka Beck's ex. It was easy to understand why Beck came away from his relationship with Jess as traumatized as he was. And Haley, bless her, was someone who had this huge heart and always put everyone else before herself. I enjoyed their romance, and I appreciated how the Busy Bean became a prominent backdrop. I loved the cameo appearances from Sarina Bowen's original True North series. Sweetheart has gotten the Busy Bean series off to a fantastic start. 4.5 stars.
Release Date: 01 March 2021
Date Read: 28 February 2021
Learn more about Sarah Mayberry.
Purchase Sweetheart on Amazon | Apple Books | B&N | Kobo.