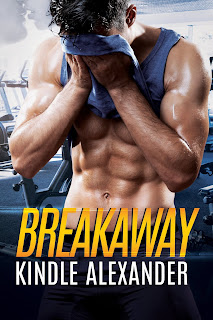 Note: An advanced reader copy (ARC) was provided by the author via Enticing Journey Book Promotions.
There's just something about Kindle Alexander's writing that never fails to hit me in the feels. Breakaway is the newest standalone from this author, and while there are a couple of "familiar faces" who make cameo appearances as well as a familiar name dropped from a couple of Alexander's previous standalones, this latest published work of theirs can still be read independently of anything that came before it (but read those anyway!).
This is the story of Dallas Reigns, a twenty-seven-year-old gym trainer working with his brothers to successfully launch their business involving interactive stationary bikes and workouts. Their idea is more than promising, but they need an influx of financial assistance. That's where thirty-year-old venture capitalist and owner of EnviroCapital Greer Lockhart comes in. He wants to help out the Reigns brothers, but there's one in particular that he wouldn't mind getting to know better. Dallas insists that he's straight, but Greer is almost sure the guy isn't. When the truth comes out, what will it cost Dallas?
I do love me a slow-burn romance, and Kindle Alexander brings "it" every single time. The build-up and then the main characters giving in and then tackling their issues and facing down the challenges that come with their burgeoning romance... Le sigh. There's nothing necessarily "light" about this book, because hello, there's angst and some heavy stuff involving Dallas and his sexuality, but this isn't a romance steeped in drama. That sensitivity and poetic tone that I've come to recognize in the author's writing is ever-present, I couldn't help but feel good with the well-earned HEA. Five stars for Breakaway.
Date Read: 15 February 2021
Learn more about Kindle Alexander.
Purchase Breakaway on Amazon.