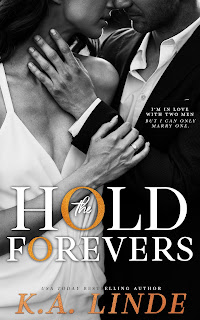 Note: An advanced reader copy (ARC) was provided by the author via Wildfire Marketing Solutions.
K.A. Linde's newest standalone is the story of one woman who has only ever loved two men at different points in her life but must now make a choice as to who she will spend forever with. Hold the Forevers introduces readers to Delilah Greer, Ash Talmadge, and Cole Davis. Ash was Delilah's first love--the boy who first claimed her heart and shared a lot of her firsts, but he was also the same boy who became her first heartbreak. Cole was Delilah's second chance at love--the boy who healed her heart and made her believe in love once again. However, they, too, would go their separate ways. Over the years, Delilah's path would criss-cross with one or the other, but who will she ultimately pick?
As is often the case when it comes to stories involving one person torn between two people, there was a great deal of angst here. Naturally, the angst addict in me relished in all of it, especially since this wasn't a case of drama for the sake of drama. K.A. Linde portrayed the good and the bad in both relationships, which is something I appreciated because there wasn't an obvious skewing of perspective for either guy for most of the book. Funnily enough, this was one of those very rare times wherein I wasn't on any specific "team"; I simply wanted Delilah to choose between one or the other. Both Ash and Cole had their faults, but there was no denying they loved Delilah. She makes her choice at the end of Hold the Forevers, and I wasn't surprised as to who it was. The bonus epilogue, Hold On to Forever, is available separately and does provide closure. Four stars.
Release Date: 23 February 2021
Date Read: 23 February 2021
Learn more about K.A. Linde.
Purchase Hold the Forevers on Amazon | Apple Books | B&N | Kobo.