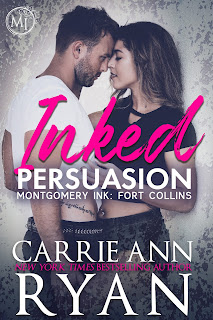 Note: An advanced reader copy (ARC) was provided by the author via Give Me Books Promotions.
How sad does it make me that I have yet to catch up on the Montgomery Ink book universe? I've read a few, but most remain on my to-be-read list, not out of a lack of interest but more of a lack of time. It's definitely one of those series that I know I've been missing out on, but I'm happy that even as vast as this book universe is, every time Carrie Ann Ryan kicks off a new spin-off series, her readers don't feel lost if they've missed a book or ten from any of the previous original or spin-off ones. And that was exactly the case with Inked Persuasion, which is the first novel in Ryan's Montgomery Ink: Fort Collins spin-off, featuring the Montgomery siblings who make up Montgomery Builders.
It's been about six years since Annabelle Montgomery married her best friend, Jonah Queen. They were only eighteen, but they loved each other--maybe not the romantic sort of love, but a love that had Annabelle wanting to give Jonah his last wish before he passed away. She went from wife to widow in a matter of days, and while her family and his parents may not have understood at first, they supported them. However, Jonah's older brother did not, and Jacob Queen grew to hate Annabelle. When Jacob decides to return to Fort Collins to be in close proximity to his parents, he doesn't realize that someone else is in closer proximity to him--Annabelle Montgomery.
This book had me from the first chapter all the way to that heartrending cliffhanger that serves as the opening salvo for the second book. Not only did I find myself becoming emotionally invested in Annabelle and Jacob's story, but my curiosity was piqued when it came to this new branch of the Montgomery family tree. These main characters had to work their way from two people who used to be friends and then one hating the other to constant presences in each other's lives and then more. The hint of suspense is classic Carrie Ann Ryan, and the angst that I've come to associate with her writing hit me in the heart. Inked Persuasion was a five-starred beginning to this new series, and I can't wait to get to know the rest of the Montgomery siblings from Fort Collins, Colorado.
Release Date: 09 February 2021
Date Read: 08 February 2021
Learn more about Carrie Ann Ryan.
Purchase Inked Persuasion on Amazon | Apple Books | B&N | Kobo.