Review: My One-Week Husband by Lauren Blakely (The Extravagant #4) 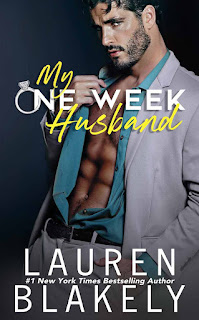 Note: An advanced reader copy (ARC) was provided by the author.
Lauren Blakely's latest standalone is a story about two business partners who are on the cusp of snagging a blockbuster deal, but in order to seal the deal, they're going to have to up the stakes by pretending to be married to each other. My One-Week Husband introduces readers to Scarlett Slade and Daniel Stewart. Three years ago, he reached out and asked her to become his financial advisor. From then on, the two not only become great professional partners, but they also forged a close personal friendship. But underneath their amicable relationship, both Scarlett and Daniel were keenly aware of one another in a whole 'nother way. When their fake marriage leads to them further exploring their very real chemistry, it becomes a week of unforgettable trysts. By the end of the week, everything should go back to the way it once was. Far easier said than done.
It was clear from the very beginning of this book that not only did Scarlett and Daniel share a connection, but that they actually did have an honest-to-goodness strong friendship. Yes, they were attracted to each other and they fantasized about one another, but there was a trust and respect that was present as well. Naturally, with stories that have the main characters engaging in something fake, you know that they're going to want the real deal by the end of the book. However, Lauren Blakely always adds her own creative spin to even the most well-worn of tropes, making Scarlett and Daniel's story special. If I was forced to pick just one thing among the slew of favorites about this book, it would have to be the exchanges between these two main characters. All it took was a fallen chandelier and a push from a couple of cupids for them to start their fabulous journey from partners and friends to much more. My One-Week Husband gets four stars.
---------------------------
Read my reviews for the Extravagant series: