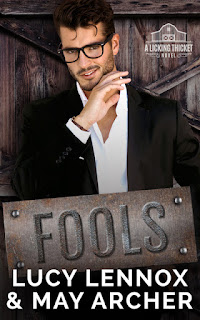 "I don't need anything in common with her, because...I have you."Oh my God. This man's brain was a fucking labyrinth.

How could a functioning human be so foolish?

How could he be so impossibly sweet?

Dunn misunderstood my silence. "I do have you, don't I, Tuck?" he whispered.

Ever since Dunn Johnson kissed Tucker Wright in Liars, I was counting the days till Lucy Lennox and May Archer released Fools. It pretty much goes without saying--at least to fans and readers of the Licking Thicket series--that this was going to be a friends-to-lovers romance. However, this is Lennox and Archer we're talking about here, so I had a feeling this wasn't going to be your typical story with this all-too-familiar trope. Dunn, whose name makes me hum the opening theme to Miami Vice, and Tucker have been each other's lives for years, and even with the eight-year age difference  between them, there was no doubting they were the best of friends. Or as Dunn likes to remind everyone, he was Tucker's best best friend. Well, of course he was! They were also each other's person, and this book relays how that recognition come to evolve from platonic to romantic and everything in between. Who says life is boring in a small town, especially one as caring and quirky and very much involved in one another's lives, as Licking Thicket, Tennessee?
Thirty-six-year-old Dr. Tucker Wright has long accepted the fact that the guy he's been in love with for years is straight. He's happy enough to have Dunn Johnson in his life as his best friend, even if the twenty-eight-year-old dairy farmer is remarkably clueless about certain things. I swear, there were times wherein I wish I could have jumped into my tablet and have a heart-to-heart conversation with Dunn, so that he would realize a wee bit more quickly that he and Tuck belonged together as more than friends!!! Gah!!! But how could I not adore the guy?! He said AND did the sweetest things to and for Tuck, and his heart was always in the right place. That doesn't mean Tuck was a slouch in the romance and bestie department though! He was very protective of Dunn and understood him better than most. If I could give an award for best cast of supporting characters, it would be to everyone in Licking Thicket in this book! Seriously, Fools was an absolute joy to read, with many standout moments throughout. Major book hangover! Five-plus stars.
-------------------------
Read my reviews for the Licking Thicket series: