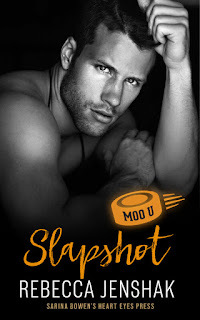 Note: An advanced reader copy (ARC) was provided by Heart Eyes Press.
I've enjoyed reading Rebecca Jenshak's sports romances the past couple of years, so when I found out that she was going to take part in Sarina Bowen's World of True North, I was excited to see what her story would be. Slapshot is the second book in the Moo U series, which features the players of Burlington, Vermont's very own Burlington University hockey team. All the books are standalones, but because this features recurring characters, there's no harm in reading each one. In short, this is me recommending you check out all the books because I read all three in this first batch and had fun getting to know and falling in love with every single one of the couples and their respective stories.
Slapshot is the story of Lex Vonne, a nineteen-year-old freshman and hockey player, and Kaitlyn Dalager, a twenty-one-year-old junior who's just transferred to Burlington University after getting kicked out of her previous college. With her father deciding to his financial support to only the essentials, Kaitlyn is forced to find work to supplement her budget, and sucks up her hatred of all things hockey and applies for the position of the college team's equipment manager. Being the daughter of one of the sport's legends has made her perfect for the job, but she's wary of anyone befriending her to get close to her dad. That's what she thinks Lex is trying to do. But maybe he just wants to get close to her.
I confess that it took a good, long while for me to warm up to Kaitlyn. She was aloof and closed off, but as the story went on and I got to see the Kaitlyn beneath the cool and distant facade, I understood why she was the way she was. On the other hand, Lex was a sweetheart from the get-go, someone who had a truly good heart and had no ulterior motives. He did, however, feel somewhat of an outsider from the rest of the team, given that he had started playing hockey at sixteen, which is much later than others. It was interesting to see Kaitlyn's walls come down and Lex come into his own in the team. Rebecca Jenshak's Slapshot was a great addition to the Moo U series and it snags 4.5 stars.
Release Date: 15 February 2021
Date Read: 14 February 2021
Learn more about Rebecca Jenshak.
Pre-order Slapshot on Amazon.