Review: Beneath the Stars by A.L. Jackson (Falling Stars #4) 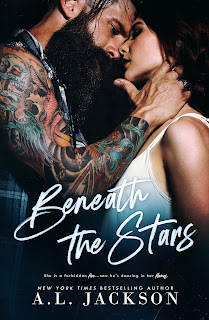 "When two people love each other, they protect each other. They take care of each other. They are willing to sacrifice, and just like I know you'd willingly give your all for me, don't you get that I would do the same for you?"

I knew going into Beneath the Stars that I would have to bid adieu to the Falling Stars series, and while I thought I was prepared to say goodbye, I sure as heck wasn't prepared for how much this fourth and final book would gut me. This series ender is a falling-for-your-friend's-sibling romance, but there's also much more to it than "just" that.
Rhys Manning knows pursuing anything other than friendship with his Royce Reed's sister would be a line that, once crossed, there would be no coming back from. Try as he might, the thirty-two-year-old bassist for Carolina George can't resist twenty-year-old Maggie Fitzgerald. But will he be able to shield her from the threats that his past brings?
All. The. Feels! Gah! Seriously, Rhys and Maggie were just... Le sigh. My heart was so invested in these two. You could see how much they wanted to be together, but with Royce making it clear he did not think that was a good idea and then Rhys's past haunting him relentlessly, there was a lot coming at and for both of them. Talk about complicated!
I take my hat off to A.L. Jackson for her gift in striking that fine balance between lighthearted and more weighted moments throughout the story. There's even some suspense added to the mix! The added bonus of having all those familiar characters from both the Bleeding Stars and Falling Stars made Beneath the Stars a five-plus-starred read.
-------------------------

Kiss the Stars (book one) - five-plus stars - My Review