Review: Cinderellis by Evie Drae (Once Upon a Vegas Night #2) 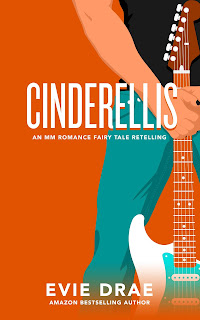 Note: An advanced reader copy (ARC) was provided by the author via Give Me Books Promotions.
Romance readers all have their favorite tropes, and one of mine just happens to be the modern retelling of fairy tales and literary classics. Evie Drae's Once Upon a Vegas Night series has the author putting both a modern and creative spin on well-loved fairy tales, and two books in and I'm still enjoying the heck out of these stories. Just a quick FYI: both books are standalones, so you can freely jump in with this second book and not feel as if you're missing essential information. But read the first book, too, since it was a fun read!
Cinderellis is the story of twenty-six-year-old Ellis Tremaine, a stagehand at Caesars Palace since he was fifteen but has always dreamed of becoming an audio engineer, and twenty--nine-year-old Henry Cinderford, more famously known as Cinder, a world-renowned singer and songwriter. When they first meet, Cinder thinks Ellis is a deejay and Ellis has no clue that the man who has introduced himself as Henry is actually the same person headlining a residency at Caesars. The two strike up a friendship, but they secretly want more, but with Ellis's audio engineer stepfather warning him off of getting close to anyone part of the show, especially the talent, there may be no fairy tale ending for him.
This was a really sweet modern take on the Cinderella fairy tale. It had a slow-burn feel to it, with Ellis and Henry (aka Cinder) forging a friendship while trying to fight their attraction to each other. Instead of an evil stepmother, Ellis has an abusive stepfather who stymied every chance Ellis could get to pursue his dreams. I do wish that the stepfather had met a worse fate than what ended up happening to him, but I'll take Ellis and Henry's happy ending over the guy being locked in a dungeon. I've enjoyed the two books in the series, and I hope Evie Drae has got more to come! 4.5 stars go to Cinderellis.
Release Date: 25 February 2021
Date Read: 25 February 2021
Learn more about Evie Drae.
Purchase Cinderellis on Amazon.