Review: My Twist of Fortune by Piper Rayne (The Greene Family #0.5) 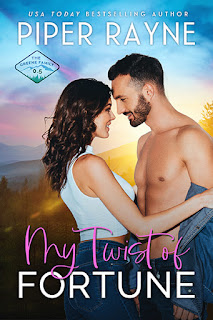 My Twist of Fortune is the prequel novella that provides the back story as to how two Greene families became the close-knit unit we get to know in the full-length novels of the Greene Family series. Fans and readers of Piper Rayne's The Baileys may remember that the Greenes were introduced in the final novella of the series, Operation Bailey Birthday. Also, let's not forget that the matriarchs of both clans, Grandma Dori for the Baileys and Grandma Ethel for the Greenes, were already the best of friends in The Baileys, and it's a friendship that carries over--along with their matchmaking moves--in The Greene Family.
This prequel features Hank Greene and Marla Greene nee McAlister. They were once friends back in high school, with Hank having feelings for Marla, but she chose his cousin, Jeff, instead. Years later, Marla is back in their hometown of Sunrise Bay, Alaska with her four children, Jed, Nikki, Mandi, and Posey, in tow after her divorce from her cheating ex-husband who was still living in Arizona. A broken heater in her parents' basement has Hank coming back into her life. He's been a widower for about five years, having lost his beloved wife, Laurie, in an accident, leaving him to parent their five kids, Cade, Fisher, Xavier, Adam, and Chevelle. Will this be the start of a new chapter for them?
This was a sweet story! One of my favorite things about it was the fact that Marla and Hank were in their forties, with the former having a failed marriage and the latter losing his wife. Yes, the end result had a Brady Bunch feel to it, but the story of the Bradys had them already married, while here, we see the complexities involved with two people who had spouses and have children find love again and begin a new relationship. This was novella in length, so it didn't delve as much as I wish it had in as far as how their respective broods interacted with each other and how Marla's kids forged a relationship wth Hank, and Hank's kids embracing Marla as their dad's girlfriend. Still, I enjoyed reading how Marla and Hank got together, so I'm handing My Twist of Fortune four stars.
Date Read: 11 February 2021
Learn more about Piper Rayne.
Download My Twist of Fortune for free on Amazon | Apple Books | B&N | Kobo.