Review: Ashton Morgan: Apartment 17B by Aly Stiles (Wreck Me #1) 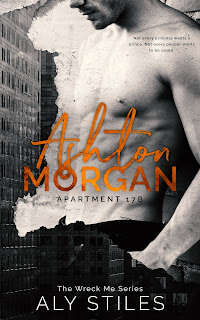 "I know it's hard to live as you, but you have no idea how hard it is to live without you."

Aly Stiles takes a piece of my heart every single time I read one of her books, and I wonder if there'll be anything left once I start tackling her back list. She writes the sort of love stories that I can't get enough of because they have the romance and the angst. I'm not talking drama for the sake of drama; nope, Stiles' books have her main characters going through certain struggles and have to hurdle challenges along the way to their happily-ever-after. Weirdly enough, I have a thing for that sort of more emotional type of storytelling. Dare I say that Stiles has become one of my favorite go-to authors, and not because she writes beautiful, angsty romances, but because she writes beautifully. Period.
Ashton Morgan: Apartment 17B is the first novel in the new Wreck Me series, and readers are introduced to the titular character, Ashton Morgan, a twenty-three-year-old guy whose life was derailed by the selfish machinations of his wayward mother. Now, instead of holding his college degree in his hands, he needs to hold on to the jobs that he has in order to provide for his eight-year-old brother, Braydon, and their mother. Interacting with someone like Iris Alexander was something he couldn't afford to want, even if being with her could be just what he needs. But what would a twenty-one-year-old daughter of a billionaire ever hope to have with a hopeless guy barely making it through every day?
I wish I could properly enumerate each thing that I loved about this book, but then I was so smitten by the totality of it. Saying this was a story about a poor guy and a rich girl wouldn't do it justice, not when you have a tale as inspirational as this one. I adored Ash and Iris! They were independent and headstrong but also humble and selfless. My heart squeezed in my chest for both of them, but not for the same reasons--which I won't get into because hello, spoilers. Suffice it to say that there were potholes and bumps along the way to their happily-ever-after, but if any person deserved it most, it was Ashton Morgan who lived in Apartment 17B with his brother. Le sigh. All the stars for this fab must-read.
Release Date: 12 February 2021
Date Read: 09 February 2021
Learn more about Aly Stiles.
Purchase Ashton Morgan: Apartment 17B on Amazon.