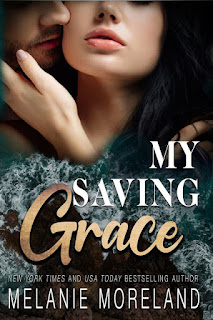 Note: An advanced reader copy (ARC) was provided by the author.
I already had two of Melanie Moreland's earlier series--The Contract and Vested Interest--on my never-ending to-be-read list, but after having read the first novel in her brand-new Vested Interest: ABC Corp spin-off series, consider those two aforementioned series bumped up to the top of said list. That being said, you can still jump into this new series starter without having read any of those other books. Just prepare to have your curiosity be piqued once the parents of the female main character in the series starter enter frame.
My Saving Grace is the story of Grace VanRyan and Jaxson Richards. She's a twenty-eight-year-old law student set to begin her year-long articling (note: articling is a Canadian term similar in meaning to interning) with Smith and Hodges, a prestigious firm. She has a plan in place and intends to stick to it. And then she meets one of the lawyers she's supposed to work under, and Jaxson Richards is everything she knows she must avoid. He's a decade older than she is and he also happens to be her boss. Keeping things professional is key, but what if Jaxson may be the one who holds the key to Grace's heart?
It's fair to say that Melanie Moreland has become one of my favorite go-to authors over the past couple of years. Her writing knows the way to my heart! I loved Grace and Jaxson as individual characters as much as I adored them when they became a couple. Grace was someone who was fiercely independent and stood her ground. She was very protective of those who mattered most to her. It was Jaxson, however, who truly went through a personal metamorphosis, and that was all thanks to him falling in love with Grace. This may sound weird, but I liked that the route to their happily-ever-after wasn't easy because there was a far greater appreciation for it all. Five stars go to Saving Grace.
Release Date: 25 February 2021
Date Read: 25 February 2021
Learn more about Melanie Moreland.
Purchase My Saving Grace on Amazon.